The ultimate 3d printed accessory for playing guitar is most likely a guitar pick. It’s a super easy and quick print – we have a whole article and video about it. However, it doesn’t end there! You can 3D print many more useful accessories and gadgets – capos, wall mounts, strap locks… Here’s the selection of our favorite models.

“Oh the song needs a capo, I’m sure I have one… somewhere.” A metal spring-loaded capo costs about $10, the problem is, you never have it on hand when you need it. Somehow, it always ends up in the wrong guitar bag or simply forgotten at home. So it would be really helpful to have a few backup ones. 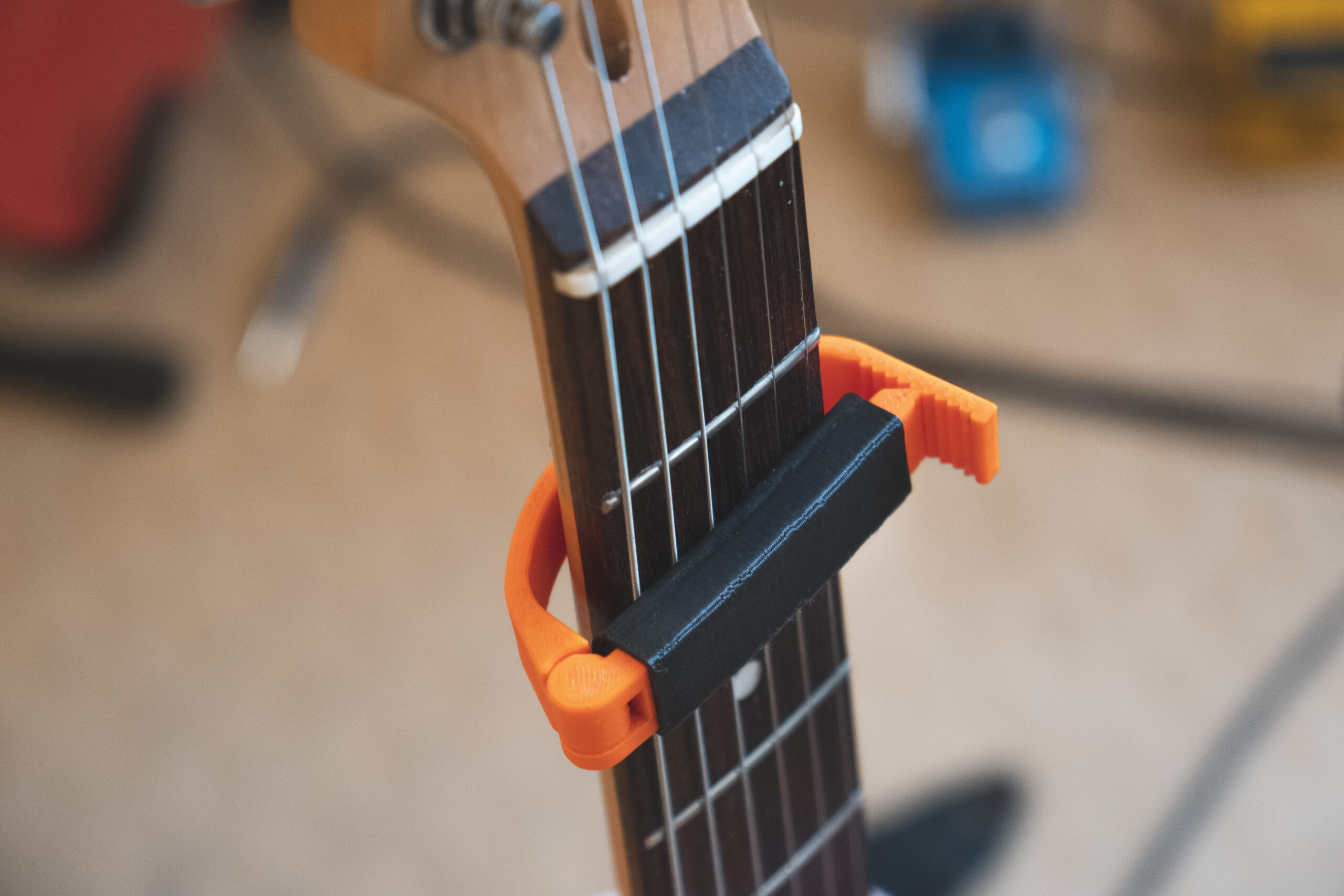 On ukuleles and mandolins, you can get away even with simpler designs. But on the guitar, the force with which the strings need to be held down is quite significant. Without enough pressure, the strings will either be muted or produce an annoying buzzing sound when played. After some searching, we’ve discovered a fantastic design by LoboCNC. It uses a print-in-place hinge and a ratcheting mechanism to clamp down the strings. This makes it very quick to put on and release again. An important feature of a capo, that you’ll often switch its position or remove it completely between songs. 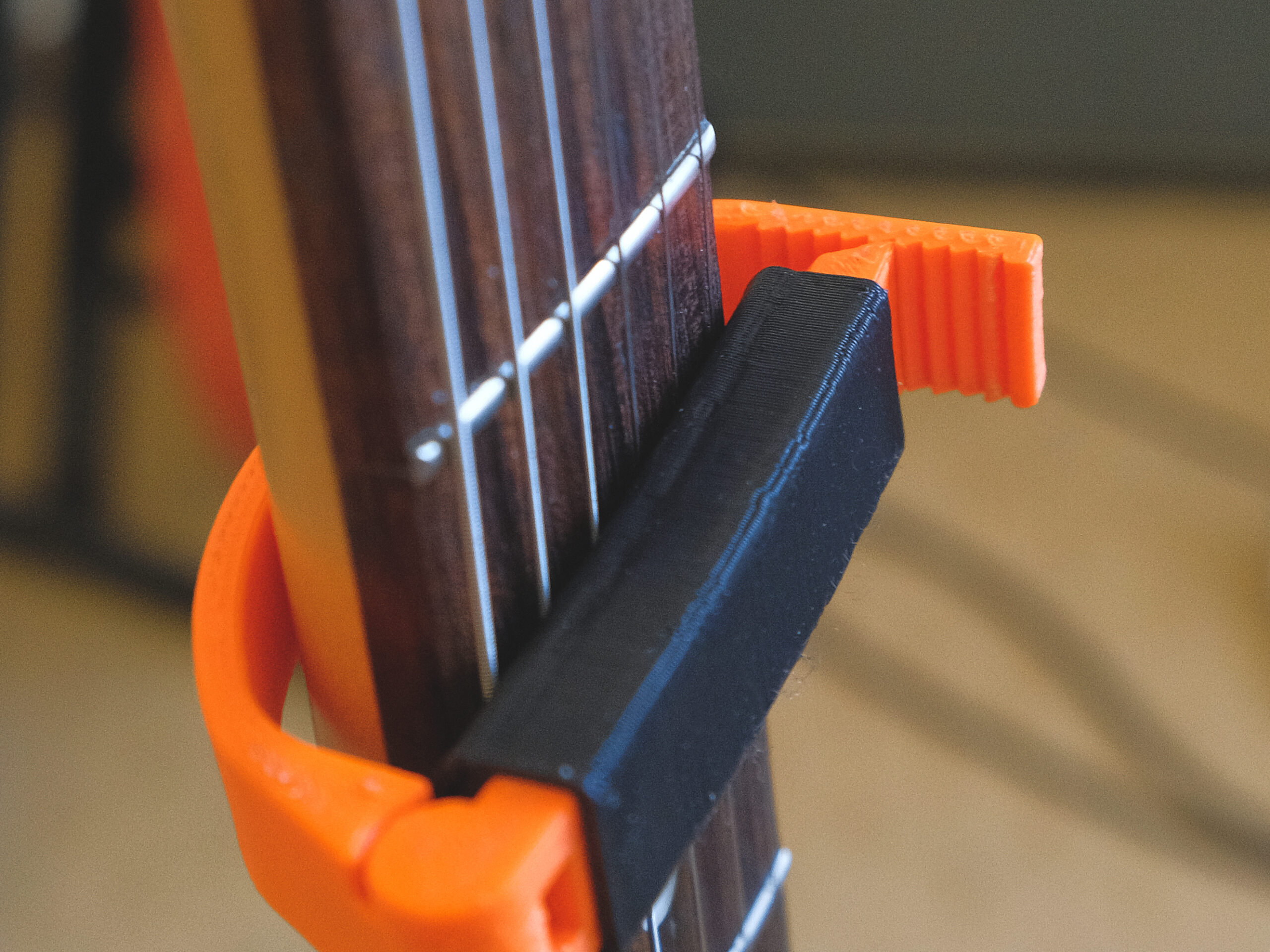 We’ve modified the design slightly (lengthened the ratchet arm) and created a rubber sleeve that can be printed from a flexible filament. It makes it easier to clamp all the strings with enough pressure without having to overtighten the ratcheting mechanism. We would also suggest putting some padding on the side that touches the back of your guitar’s neck. The hard plastic could scratch it, which you definitely want to avoid. A couple of pieces of electrical tape stacked on top of each other will do the job nicely. The ratchet was printed from Prusament PETG Prusa Orange.

If you’re the kind of person who hasn’t changed the strings on your guitar in years, please, do it for us.😁 Even if you’re not a frequent player, it’s a good idea to change the strings at least once a year, you’ll feel and hear the difference.

If you own a guitar with locking tuners, replacing a guitar string is a breeze. However, on standard tuners, twisting them can get quite tedious. Especially if you’re replacing an entire set of strings. With a printed string winder bit, you can use an electric screwdriver to make the process much faster. For unwinding the string, it’s fantastic. Be extremely careful using it for winding the new string though. As soon as you feel the string getting any tension whatsoever, it’s time to continue winding it by hand. We tested the guitar string winder drill bit by Keksa and Guitar string winder drill bit by bassklampfe, both worked great.

Guitar string height (or action) is something that you can adjust on most electric guitars. Typically, you want the strings as low as possible for comfortable fingering. But also high enough so that even at maximum vibration the string won’t hit the metal frets beneath it and start buzzing. The strings should form a nice arc, matching the radius of the guitar’s neck. You do not want a sudden height change between them. This can be fairly difficult to achieve, especially if it’s the first time you’re adjusting it. With these 3D printed under-string radius gauges by Chris, you can simply raise the strings all the way up and then slowly lower them down, until they touch the gauge. Quite handy! 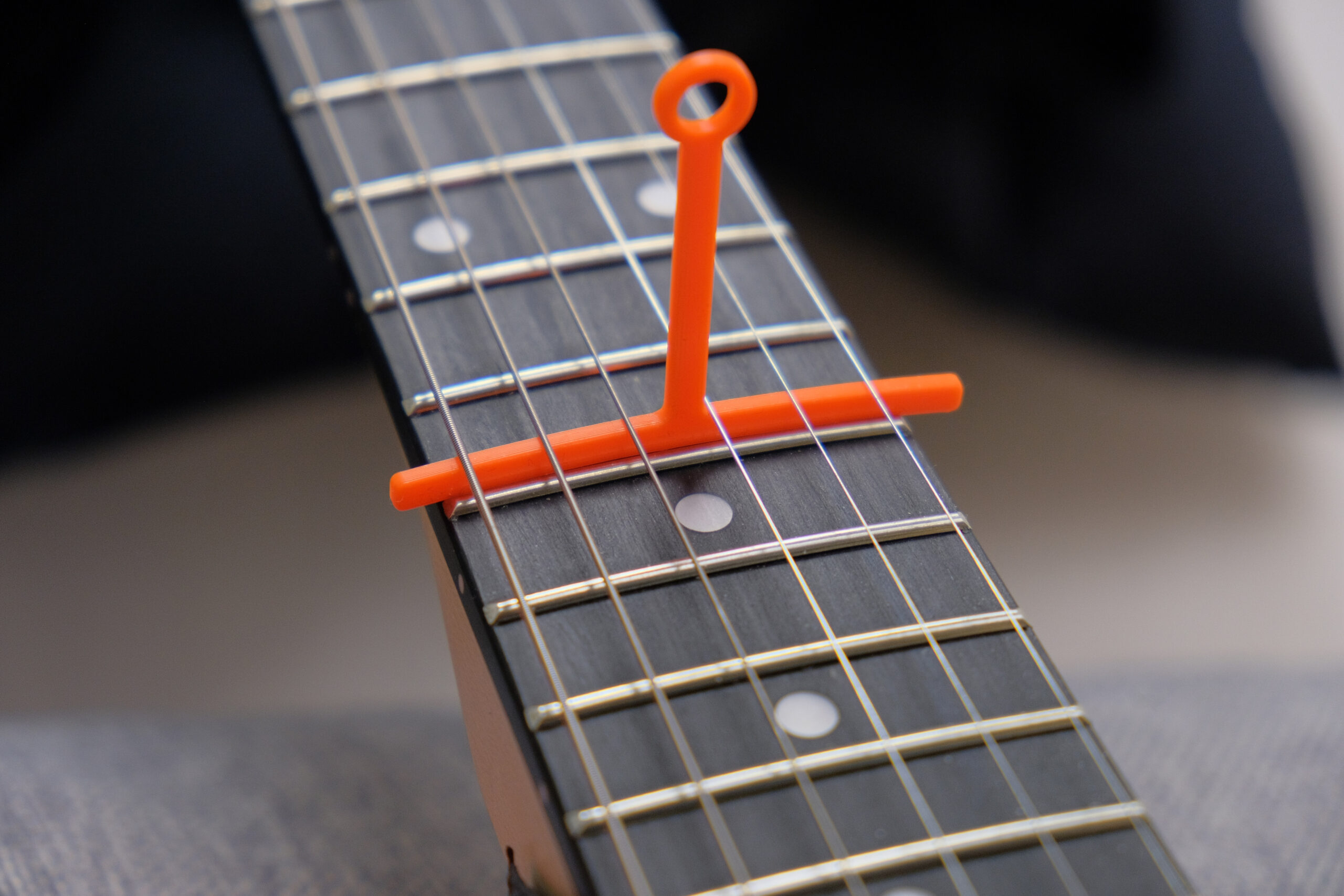 Even though the primary purpose of a guitar is obviously to be played, it can also work as a nice room decoration. A few guitars hanging on the wall can completely change the vibe of a room. We were initially a bit skeptical whether a 3D printed wall mount will be strong enough to support the weight of a guitar. But we were pleasantly surprised with how sturdy they are. We tried breaking them, pulling on the guitar or hitting the hanger from the top. The only holder we managed to break was the Guitar holder (normal/wide) – wall mount by Mellloun printed from Silk PLA. The additives which make filament shiny also decrease the layer adhesion. Which is exactly the way the holder failed, clean separation along the layer line. Other filaments we tested did not have this problem, including the Prusament PLA Galaxy Black. When printing these, we suggest using at least 4 perimeters, to increase the mount’s strength. 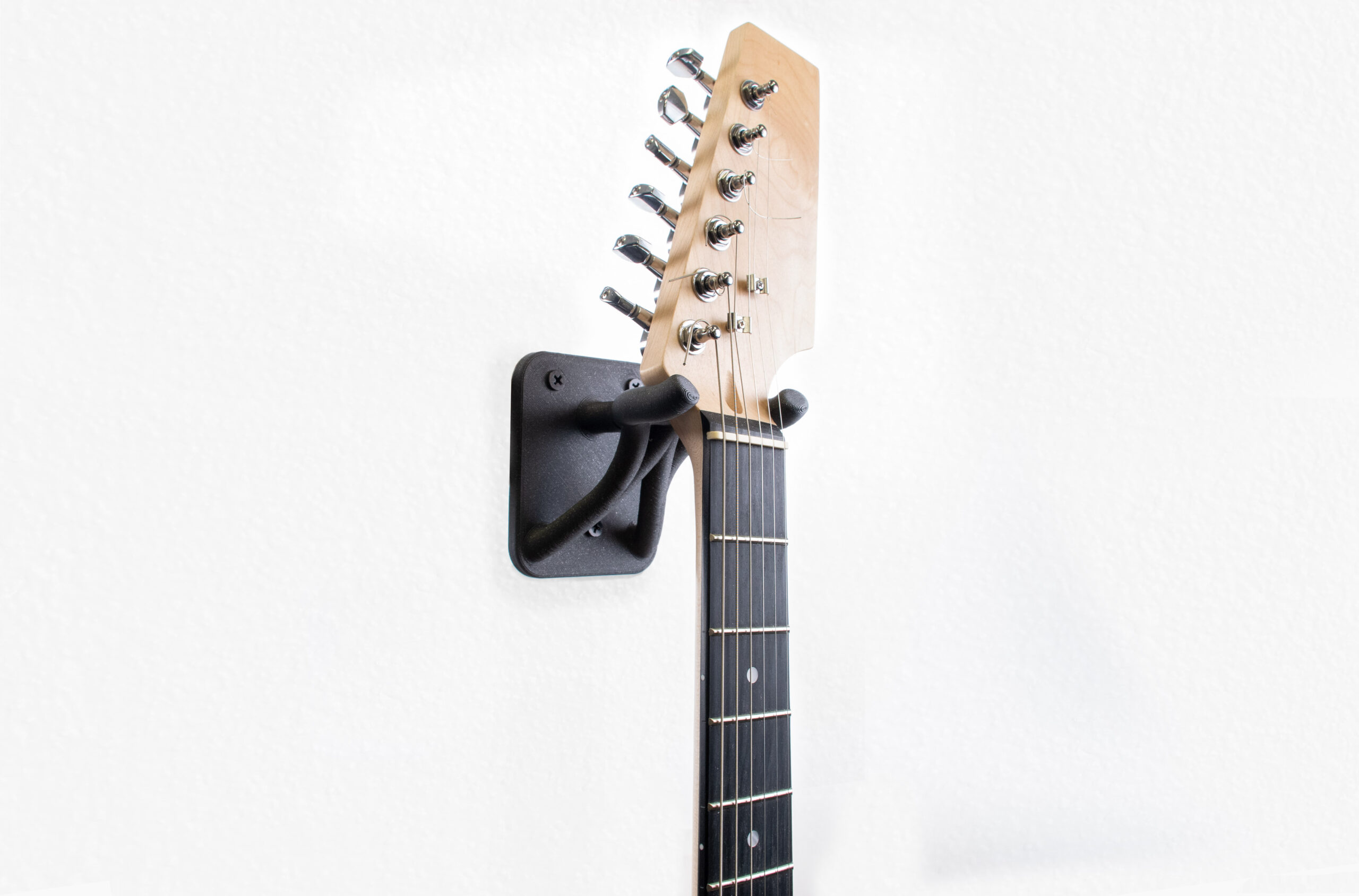 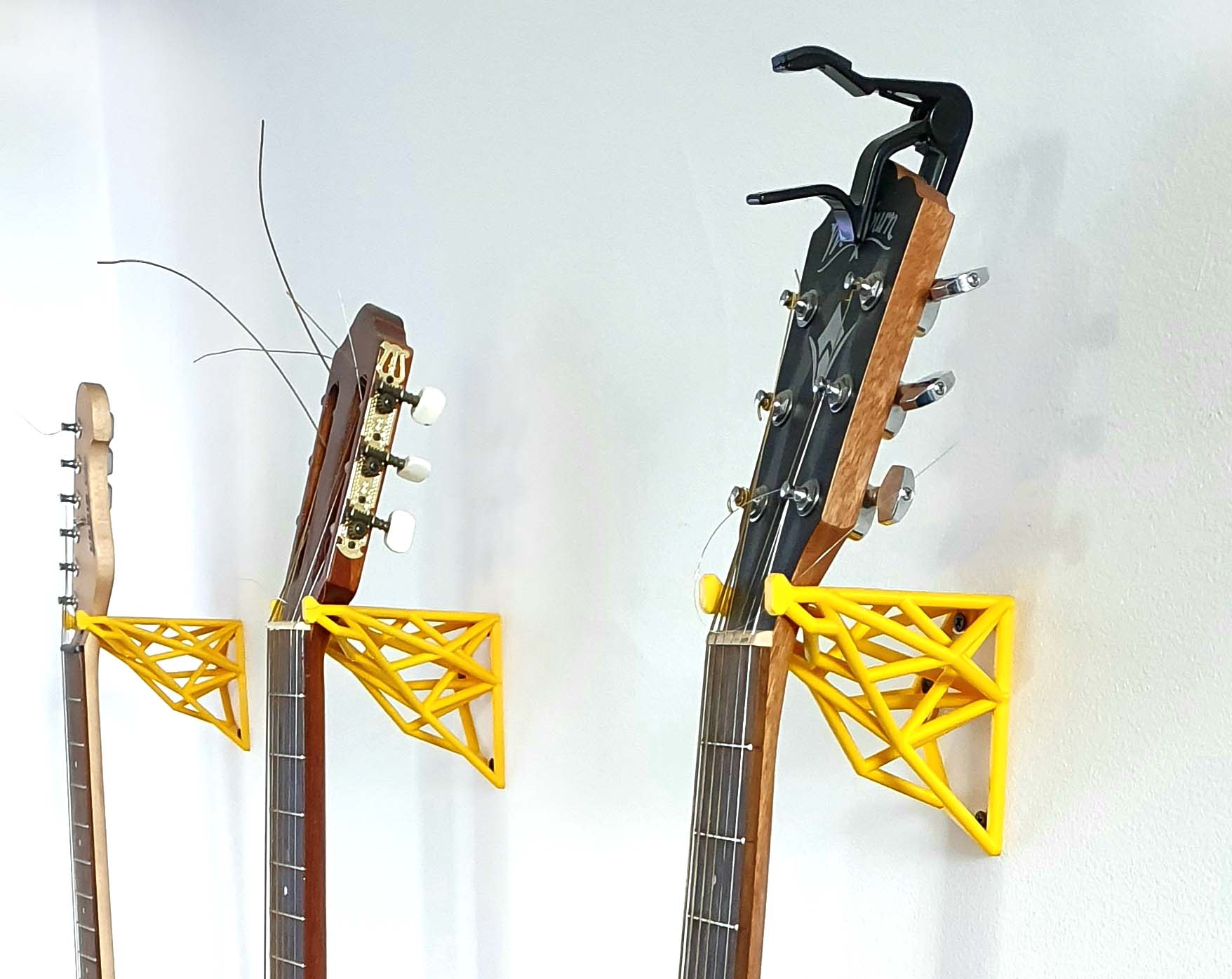 This 10-minute print can prevent your guitar from being dropped and getting damaged. Hopefully, it never happened to you, but some straps have quite a loose fit and catching the guitar just in time after the strap slipped is nerve-wracking. With the strap lock, you don’t have to worry about it anymore. You can print it in black, which will make it almost invisible, match the color of your guitar or choose a nice accent color.

One way to mitigate the picks disappearing seemingly into thin air is to print a pick holder. There are tons of designs on PrusaPrinters. The design by Lucas. G a attaches to a mic/guitar stand, it can hold just 3 picks, but they are extremely accessible. The guitar pick holder by Mike VvT is a super simple design, that you can fairly easily re-scale to fit most pick sizes. And the Telecaster guitar pick stand by Ettyl Vrye holds just one pick, but it just looks so funny, it would work great even as a gift for a friend. 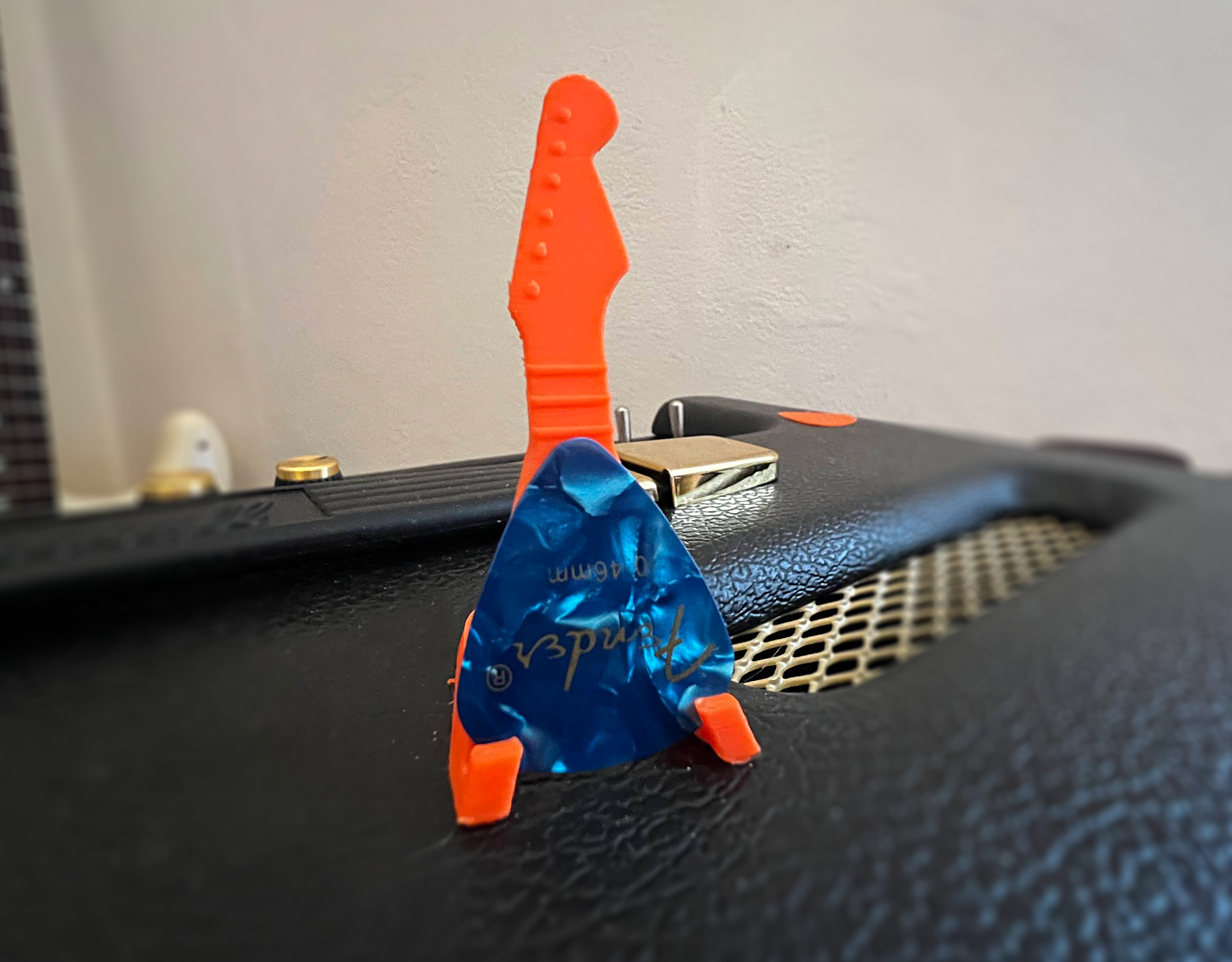 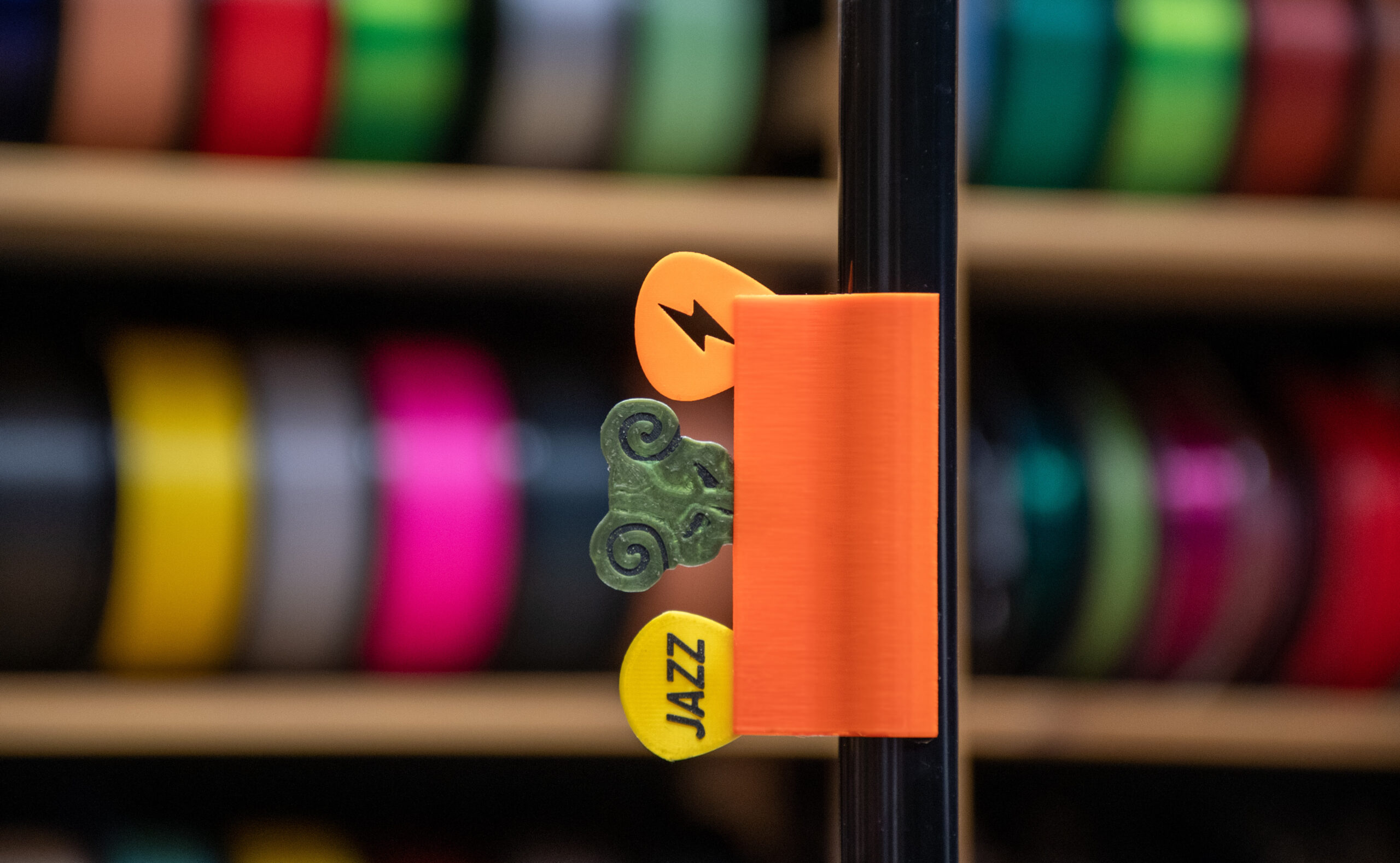 In the past, we covered 3D printing and playing on recorders, ocarinas and kazoos. And when talking about playing guitar specifically, we investigated if it’s possible to 3D print guitar picks and how well they perform. But we’re already working on a new project and let’s just say, that this time it’s much bigger than a guitar pick. 😉 Stay tuned for more articles and videos about 3D printed musical instruments and as always – happy printing!