There are a number of 3D printing applications that can make a big difference in someone’s quality of life. The e-NABLE and Team UnLimbited projects, which create free 3D printed hands and arms for those in need of an upper limb assistive device are a great example. Today, we’re going to look at another project that aims to help people. It has been developed by Barbora Endrstova, now a postgraduate from Czech Technical University in Prague, and it’s called Reprobooktor. The name is a play on words, a combination of “reproduktor” (a Czech word for “Speaker”) and “book”. We have asked Barbora a couple of questions about her interesting project…

What is Reprobooktor and what was your motivation for creating it?

Reprobooktor is a device designed to make it easier for the elderly with vision impairment to listen to audiobooks, give them access to current technologies. Any new opportunity for an independent leisure activity can have a very positive impact on their quality of life. This is a rather important topic for this target group because they are exposed to new obstacles, negative emotions or depression due to their loss of vision.

Reprobooktor’s design allows visually impaired seniors a new level of independence and the ability to enjoy free time without any assistance – which is something many people take for granted.

The advantage here, in the Czech Republic (as in some other countries), is that audiobooks are available free of charge for the visually impaired, through an internet library. Using the audiobook is not limited by the number of audiobooks the user can afford to buy. In addition, the functionality of the device could be extended by other features such as radio, television, or RSS reader, so that you could access the Internet content using the Reprobooktor.

This is probably because designers have not been too concerned with this target group when designing the user interface. The available players are often suitable only for younger users, which means that they are small devices with a display or a touchscreen and a number of small buttons located close to each other. These user interfaces do not take into account impaired motor skills and fingertip sensitivity, which can in many cases deteriorate due to aging and various illnesses. There are players on the market for the elderly, that play audio from a flash drive or an SD card. These can be a little bit easier to use but still have their own issues. The same buttons cover various functions, the functionality is too limited… For example, you cannot easily rewind the track. Another problem is uploading content to your device. Our design simplifies the process of adding new content through remote-upload capability. We expect that caregivers or relatives can take care of content management.

“Listening to books should not be limited by users’ computer skills.”

How did you go about designing the prototype?

First, I studied the context in which the device will be used. I went through all the related challenges of the target group, such as aging, loss of vision, health status and what influences them. I had the advantage that I could follow up on another project at CTU, which worked with visually impaired seniors.

I did extensive user research, which included interviewing the blind and inquiring about their experience with listening to audiobooks. The design went through a number of revisions. I created a prototype and then consulted with Lukas – a visually impaired expert who, by the way, came up with the name for the speaker. After consulting with him and fine-tuning some imperfections, the testing with a target group began.

I made the first prototype from a regular book, a hard-cover. This turned out to be good enough for the initial testing of the concept, but a more robust design was needed for long-term use. So this is why we chose to produce the second generation of the prototype on a 3D printer.

The first prototype created from a hard-cover

How did 3D printing help you during the design process?

First, it’s a great prototyping device! It enabled me to produce the challenging parts of the prototype quickly and cheaply, plus it was possible to continually improve the prototype until I arrived at a satisfactory shape. This was important for my project. You simply can’t show a sketch to visually impaired people and ask them what they think. They need to touch a physical object to be able to give you feedback.

We do have various printers at the university, but I ended up using the Original Prusa i3 MK3 that we have at work. As you expect, the parts came out great. The only real problem I had was with printing the spine of the book from a flexible filament. I think the idler was too tight, once I loosened it, it printed fine as well.

What hardware did you use in Reprobooktor?

Raspberry Pi is the core of the book. It provides the player functionality and file management. An Arduino Pro Micro board is connected to the Raspberry Pi, and it works essentially as a keyboard, providing status for each control component. I’ve written a Python app that runs on the Raspberry that checks for the various inputs. Everything is powered by a Li-ion battery, which can be charged using the USB-C port located on the top of the book. The fun part is the hinges, which I salvaged from an old laptop. There’s also a magnetic sensor that detects when the book is open. Last but not least, there are 18 buttons, a potentiometer, and two speakers. 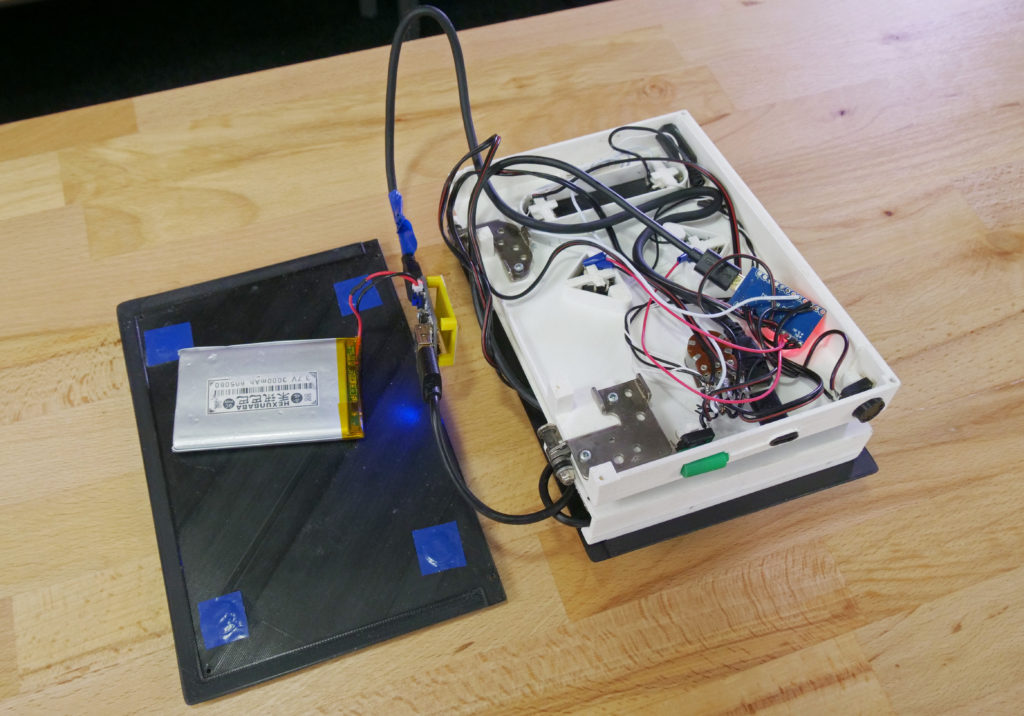 Like most prototypes, the wiring is currently a bit chaotic

What can Reprobooktor currently do and how does it work?

There’s a big lever on the front of the book. By rotating it, you select which audiobook you wish to play. The titles are read out loud. You can press any of the buttons on the circle to hear a quick description of the book. To play the book, you simply open it. Inside you’ll find controls that let you:

On the side of the device, there are two buttons accessible in both states (closed and opened). They can tell you:

How are end users satisfied with the product?

I tested the prototype with the target audience and the feedback was very positive. They appreciated the familiar shape of a book and after a few minutes of testing recognized all of the control elements. When I was testing with one participant in a retirement home, a whole group gathered around us and they were interested in trying the device, some even asked where to buy it and how much it costs. That was rewarding. 🙂

What is your vision for the future of the project?

I would like to make the device available to more users, but I know there is still a lot of work ahead. Maybe more than I can imagine at the moment. It’s necessary to refine the prototype so that it’s robust and reliable. And I’ll have to create a cloud application to allow remote uploading of content. Then comes the long-term testing. One of the next goals is to get into a startup accelerator.

Editorial note: Reprobooktor is still in prototype phase so we can’t share any STL files or walkthroughs right now. But if you are interested in this project, send an e-mail to reprobooktor (at) gmail.com.