ASA Prusament is here! Learn everything about the successor to ABS!

Ten years ago, when you wanted to print anything on a RepRap 3D printer, you had pretty much only one option: ABS. It wasn’t exactly easy to get everything right. Printing ABS without a heated bed introduced a number of issues. Soon, new materials started to appear, however, ABS remained among some of the most frequently purchased materials along with PLA and PET. We’re pretty sure that many of you built a 3D printer enclosure just because you needed to print with ABS.

When we started internal talks about a new Prusament type we could add to the current lineup of PLA and PET filaments, we wanted to have something close to ABS, but with fewer cons. Please welcome our new ASA Prusament!

As always, we spent a lot of time with research, development and testing. We went through eight different types of nurdles (the source material for producing filaments). What sets various types of nurdles apart are three of their main monomers. However, choosing the best source material was only the beginning. Another important part are the pigments – additives, which affect more than just the color of the filament. Some of the testing samples we produced worked well with our printers and were easy to print with. On the other hand, they were extremely difficult to produce. Other samples were the exact opposite. Eventually, we found the ideal combination. Of course, you can inspect every purchased spool through our online tool and see all the manufacturing parameters. You can find a detailed technical data sheet here.

ASA can be considered a true successor to ABS. Compared to ABS, it’s UV stable, it doesn’t suffer from shrinking so badly and the fumes produced are much less noticeable. ASA 3D prints are durable, tough and suitable for a wide range of applications. The glass transition temperature is also higher compared to PLA and PETG, which gives objects printed from ASA an excellent temperature resistance – there are no signs of deformation up to temperatures near 93 °C. Thanks to all these properties, ASA is especially suitable to print objects meant for long-time outside use.

However, you can still encounter some issues related to shrinking (warping) of the material – especially when printing larger models. Even with the heatbed set to 110°C, the prints can shrink and warp, causing them to detach from the print bed. However, the effects are much less severe compared to ABS. This issue can be eliminated by printing inside an enclosure or by adding a tall skirt around the object. More about this later.

Pros and cons of ASA

One of the biggest pros of ASA is its UV stability and the possibility to use acetone for processing – namely for smoothing out the surface or for gluing multiple ASA parts together. High temperature resistance is also a plus. For example, we use ASA to print the fan-shroud part for our 3D printers – this part creates an optimal airflow for cooling down the printed object.

As for the print quality, it is fully comparable to PLA. ASA 3D prints are very detailed, without stringing, there are no issues with bridging or overhangs. You can see the overhang tests in the photo below (from left: 45°, 30°, 20° and 10° angles). 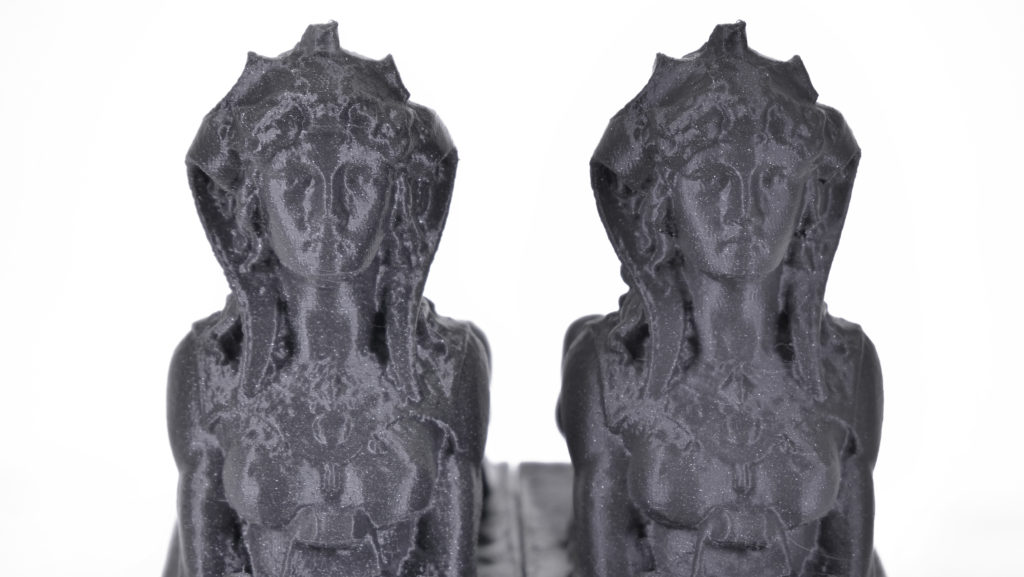 Chemical composition difference between ASA and ABS
ASA thermopolymers were developed with the aim to produce tough plastics with ABS-level properties, but with an added weather resistance. ABS is tough thanks to the rubber polybutadiene-based component. However, it also causes an increased sensitivity to UV light because of double bonds introduced through styrene co-polymers. However, if the butadiene rubber is replaced with acrylate rubber, the result will be ASA – a tough and weather-resistant material. In layman’s terms: Objects printed from ABS will lose their toughness and durability, plus they will also turn yellow during prolonged exposure to UV light. Objects printed from ASA can withstand these conditions for a much longer time. 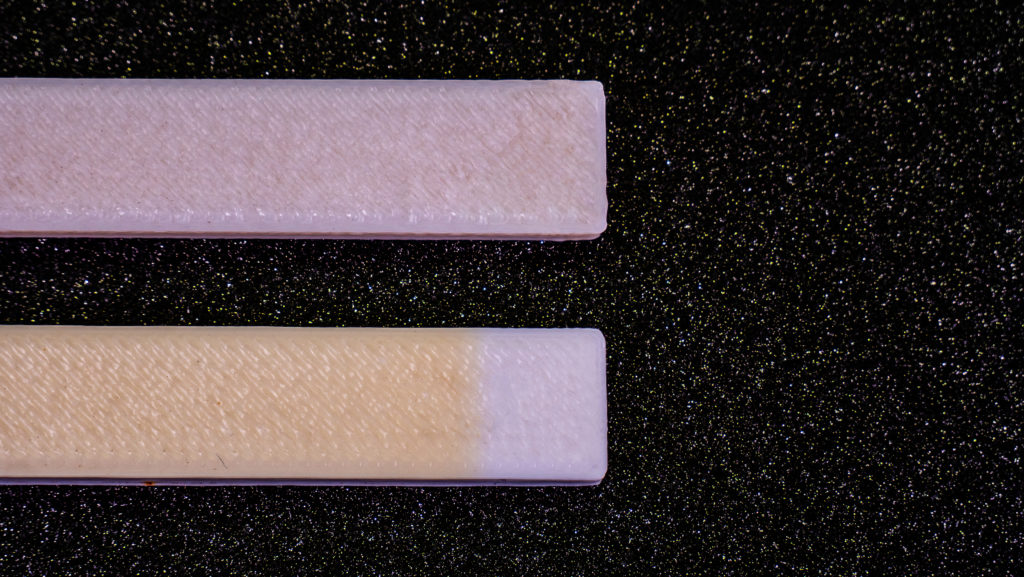 In the picture below, you can inspect two objects printed from ASA (the top one) and from ABS (the bottom one). These objects were placed outside and exposed to varying weather conditions. The right part of the model was covered and thus shielded from UV light. The difference is visible to a naked eye. Also, ASA (compared to PLA and PET) has a very high temperature resistance – up to 93 °C.

How to print with ASA?

High temperature resistance, one of the advantages of ASA, brings a certain side-effect that needs to be taken into account during printing: printed objects are prone to warping and lifting from the print bed. This is caused by the temperature difference between the nozzle (260 °C) and the ambient room temperature. If the print cools down unevenly, it creates an internal tension, which results in print issues. Generally speaking, 10×10cm objects should print fine, however, there are many factors entering the equation – shape, infill, ambient temperature, airflow and others. Also, the rule of thumb here is that objects with a round base will spread out the internal forces more evenly compared to an object with a square base.

ASA printing requires specific conditions for successful results. It’s important to run the prints in a well-ventilated room, because the material releases fumes and substances that could pose a potential health risk. However, when ventilating the room, do not create a draft around the print – this will negatively impact the result.

How to improve the quality of prints and eliminate defects

The easiest way to reduce bending or warping is to adjust the height of the “Skirt” to match the overall height of the model – a Skirt is a single-perimeter wall, which creates a “wall” around the object. This reduces the cold air flow around the object and also retains some of the hot air rising from the heatbed, which helps to reduce the difference between the nozzle and the print itself.

The original purpose of the skirt was to ensure there’s an optimal level of pressure inside the nozzle. When it comes to ASA, the skirt is used for a different purpose – which brings one problem: the skirt has a shape derived from the shape of the printed model (in the top-down view). This means that a model with a square base will result in a square-shaped skirt. And since it’s a single-perimeter wall, it may have a tendency to lift from the print bed in the corners, which may negatively affect the print.

There’s a simple solution, though. You can create a custom-made skirt in PrusaSlicer and it will take just a couple of seconds. Import an STL model of a cylinder along with the model you would like to print. Change the size and position of the cylinder, so it encompasses the main object. Then change the cylinder’s parameters to 0% infill, 0 top/bottom layers and change the wall thickness to 1 perimeter. Yes, those are some extra steps, but the results are very well worth it.

Printing inside an enclosure

Which colors are available?

Due to a very specific use of ASA, we are offering four colors for now – some are inspired by other Prusament materials.

All Prusament ASA filament spools have a guaranteed minimal weight of 850 g. Why not 1 kg like with every other spool? The reason is the material density – for ASA, this value is 1.07 g/cm3, however, for PLA and PETG it’s 1.25 g/cm3. This means that the volume of material on ASA, PLA and PETG spools is the same. In other words, you can print the same number of objects from a 1kg spool of PLA/PETG as from a 850 g ASA spool. The amount of material is better specified using in volume units or length, rather than the overall weight of the spool. If we wanted to produce 1kg spools of ASA, we would have to manufacture a new, wider, core of the spool. This would mean we would have to produce new boxes as well, along with re-adjustments of our filament manufacturing lines and other issues. 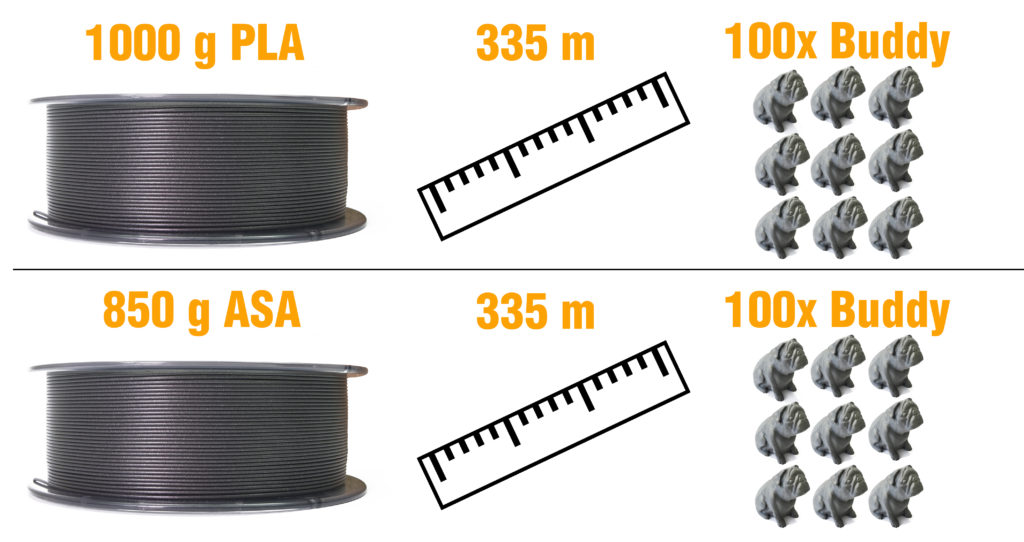 ASA is a material that can be easily post-processed. It’s possible to sand the parts using wet or dry sanding methods, smooth them out with acetone vapors, and glue them together with acetone. The result of acetone post-processing will be a very glossy, smooth surface similar to a surface treated with car paint. However, this also leads to a loss of small details and rounding of sharp edges.

WARNING: Acetone and its vapors are highly flamable! Acetone may also cause serious eye irritation, drowsiness or dizziness.

You can easily build an acetone smoothing chamber. You will need a container that’s acetone-resistant (e.g. from PP – Polypropylene). The best option is to have the print suspended in mid-air, so it’s not touching anything – contact areas would be easily recognizable. Then, pour some acetone on the bottom of the container and close it. You can accelerate the process with a fan (for quicker air circulation), or by slight heating of the chamber. Do not work with open fire anywhere near acetone or where acetone vapors may be present! Acetone is highly flamable!

What affects the results the most are the length of the exposition of the object to acetone vapors, the temperature of the vapors, acetone vapor concentration and the vapor flow in the chamber. Keep in mind that smoothing causes a slight increase of the object’s volume, and the surface will remain soft for several hours after smoothing. If you want to smooth out only some parts of the model, use a regular tape to mask selected areas.

While this is a great way how to make the surface nice, smooth and shiny, it’s not a universal solution. We would advise not to use this method in case you’re trying to achieve a perfectly precise result. Plus, acetone can create white maps on dark colors and if the liquid gets inside the print, it will deform the object. 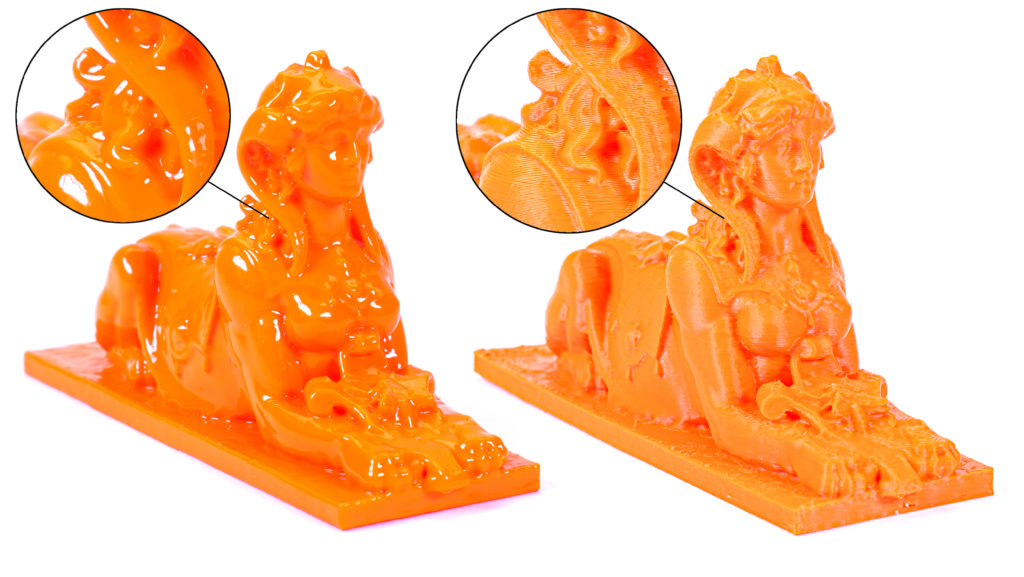 26 Replies to “ASA Prusament is here! Learn everything about the successor to ABS!”