Revealing the new detailed analytics for your models on Printables.com

If you share your printable designs online, you know the thrill and excitement that comes with a model release. You check your profile every few hours to see how it’s doing, read every comment on it, and then see the first community makes of it. But refreshing the model page gets old quickly and it’s hard to keep track of how well the model is doing after just a few days. We’ve implemented a new analytics dashboard, which will give you easy access to all your model statistics in a quick and clean user interface, let’s check it out!

Speaking of the data period, we’re giving you full control. You can use the quick shortcuts to select data from the last 28 days, 6 months, a year, etc. But you can also set up a custom time interval.

Below the summary, you’ll see breakdowns of individual metrics – Likes, Downloads, Views, Makes, Remixes, and Collections. To make the graphs easier to read, depending on the length of the time period you’re viewing, you can group the data points by days, weeks, months, or years. If you’ve ever used Google Analytics, you can see where we took the inspiration from.

If you’ve been sharing designs on Printables for a while already, a graph that’s particularly fun is the one showing Makes. You can clearly see when we introduced the reward systems and the number of Makes uploaded to Printables suddenly skyrocketed! And it stayed high like this ever since.

At the bottom of the analytics page, you’ll find a list with all your models and their statistics. All the data here are again from your selected time period. You can easily sort the list to find your most popular model from the past month, as well as your most popular model of all time. There is even a search box in the top right corner, which you can use to filter the models in this table. Especially useful to those designers on Printables who have hundreds of models published already (looking at you, MZ4250). 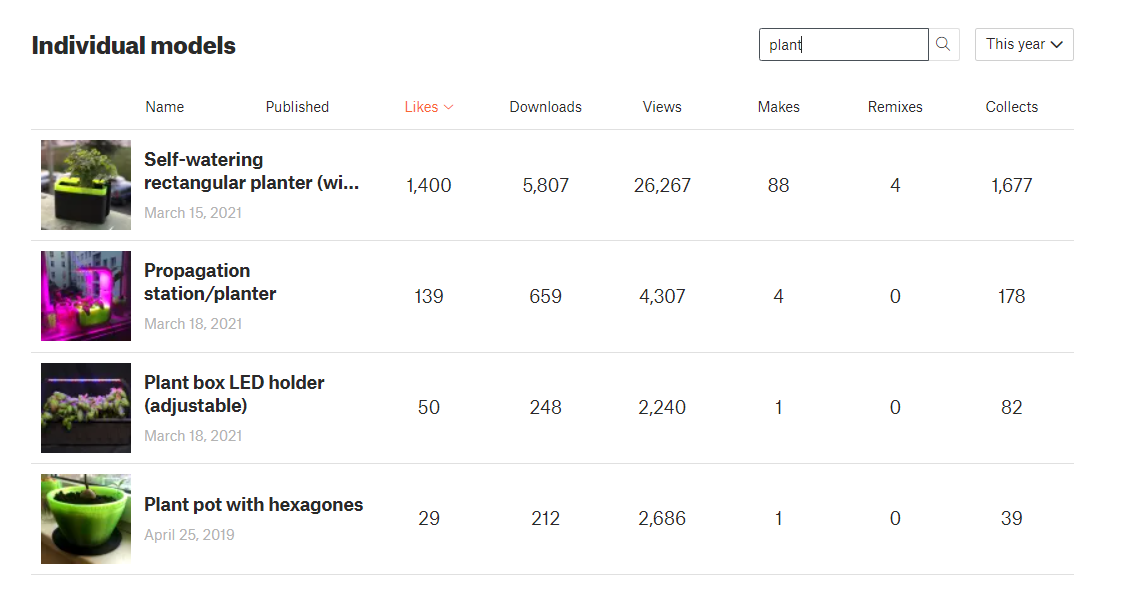 If you click on a model in this list, you can view its detailed analytics. Again, you can filter everything for a specific time period or only look at a few selected metrics. This screen is also accessible directly from the model detail page. Only the author of the model can view its analytics though.

Other changes to Printables.com

Creating your own model database, like Printables.com, is a huge undertaking that requires a full team of skilled developers. Back when we first started working on it, in order to accelerate the development, our plan was to hire an external company to do the majority of the work, then transition to in-house development over time. The choice for the external developer fell on COex – a Czech company with over 15 years of experience working on large-scale web applications, integrations, information systems, and tailor-made e-shops.

Over the following years, while the project management was in-house, COex was responsible both for implementing new features and for running and monitoring the server infrastructure. Also worth mentioning is our fantastic graphical designer Jan Diblík, responsible for the whole look of Printables. Early this year, we started growing our own internal team and collaborating on the development. Now that we have a full in-house team of web developers specifically for Printables.com, we’ll be doing all the development ourselves. The analytics was the last feature that we developed in collaboration with COex we hope you’ll agree that it turned out great. We’d like to take this opportunity to thank COex for all their work. 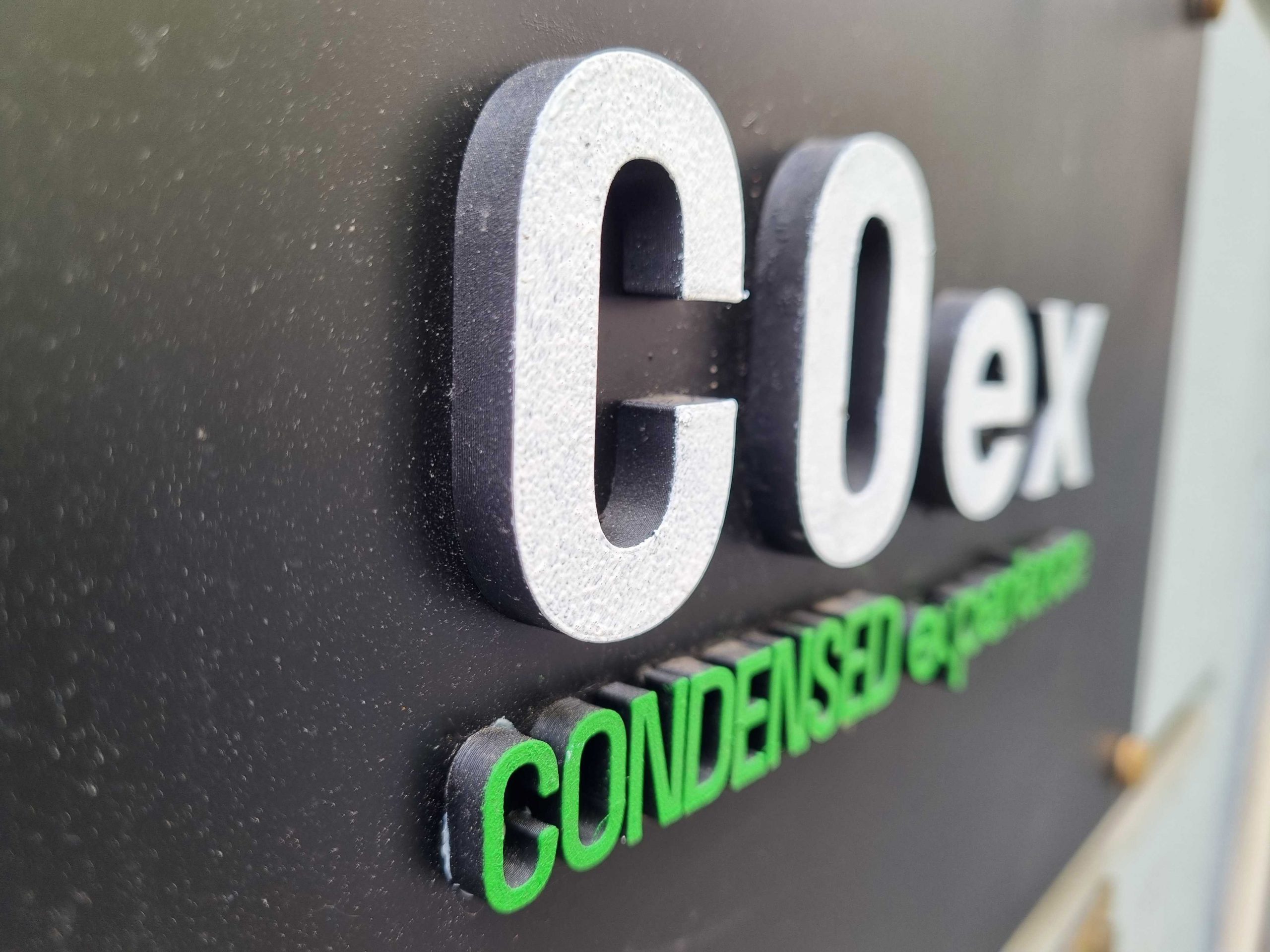 Something that’s not visible to the user is the server infrastructure running Printables. Well, it’s not visible as long as it’s blazing fast! To keep it that way and as a part of our transition to full in-house development and upkeep, Printables now use Kubernetes. This open-source system allows the automatic scaling of containerized applications. What does it mean? Instead of one super powerful server, imagine the Printables infrastructure as a collection of several normal servers (nodes) scattered around the world. If there is increased traffic and these servers are getting close to the limit of what they can handle, a new server automatically starts booting and within minutes, it’s ready to help out and share a part of the load. And once the load eases out, some of the servers will be released again, so we’re not paying for them unnecessarily.

Not only that, but this also allows for zero downtime deployment. When we want to release new features (like the analytics) we can start spawning new nodes and turning off the old ones. So as you’re browsing Printables, you’ll suddenly be getting data from a new updated server with new features. Of course, it’s not as simple as it sounds. We had to rewrite some of the Printables source code, so the website can run in a container. This wasn’t without its problems and we had a few outages as a result of that. But in the long run, this should ensure Printables will always be quick, responsible, and with minimal downtime.

We have significantly lowered the load on the CPU when browsing the model database. This improves the responsitivity of the site and lowers the battery drain of mobile devices. We have also fixed several bugs – including wrong text wrapping around images, wrong display of the 3 highlighted badges on a user profile, and a couple of UI fixes for messenger on mobile devices.

We have more new features to come, some of them are small improvements, but some are big new features we can’t wait to show you. Until then, happy printing!

12 Replies to “Revealing the new detailed analytics for your models on Printables.com”