How we made a Steampunk-themed Original Prusa i3 MK3S

Today, we would like to show off something unusual – a custom-made modded Original Prusa i3 MK3S. This one was made for “Tested”, specifically for Adam Savage, as a gift, because we know that Adam is a big fan of the steampunk. Steampunk is a science-fiction genre, where everything is influenced by 19th century steam-powered machines. It’s a kind of “what if” scenario that focuses on futuristic inventions powered by steam.

The printer was based on a standard Original Prusa i3 MK3S kit and no functional parts of it were modified – we wanted to ensure smooth operation and compatibility with future upgrades. Therefore, it is a visual overhaul that does not affect the MK3S’ high printing quality. Yes, it prints as a normal MK3S! 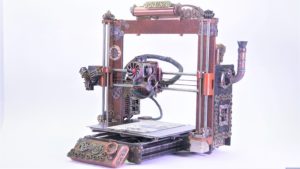 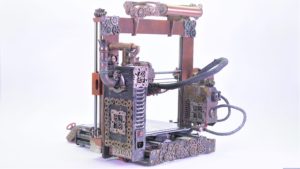 All the new printer parts were printed on our new Original Prusa SL1 MSLA resin printer. The printing of the parts alone took over 80 hours of print time and consumed over 1.5kg of resin.

We were really thorough with this modification: pretty much every part of the printer (with the exception of belts and Z-axis rods) was modified in some way, or at least painted.

We took the aforementioned Original Prusa i3 MK3S assembly kit and spray-painted all its plastic parts with standard bronze color. Then, black and green colors were used to add a “weathered” effect – these were tempera colors diluted in water and applied with a brush, then wiped with a paper towel. 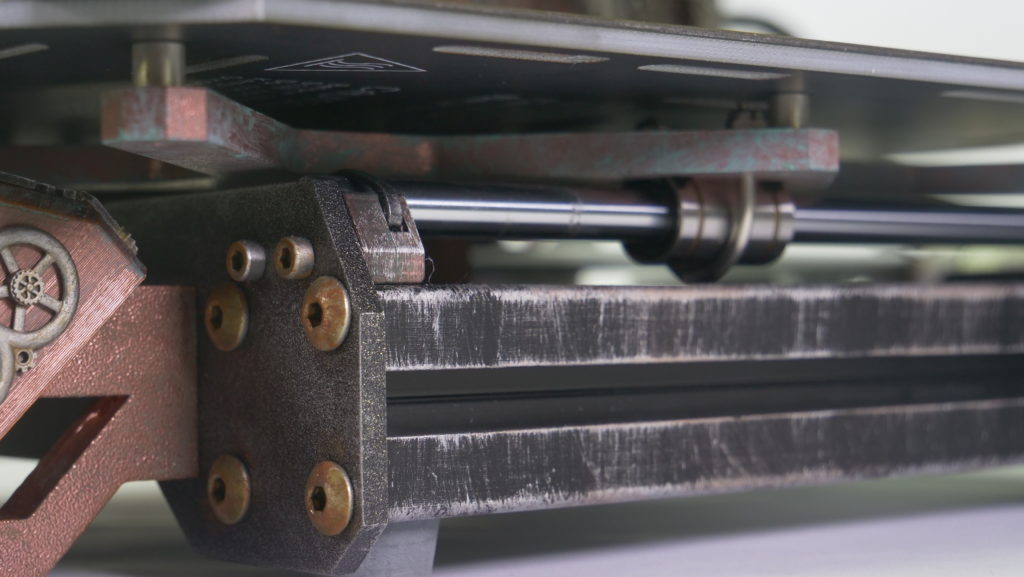 Black frame parts on the X-axis and Y-axis were drybrushed with a silver color to give it a subtle scratched effect. 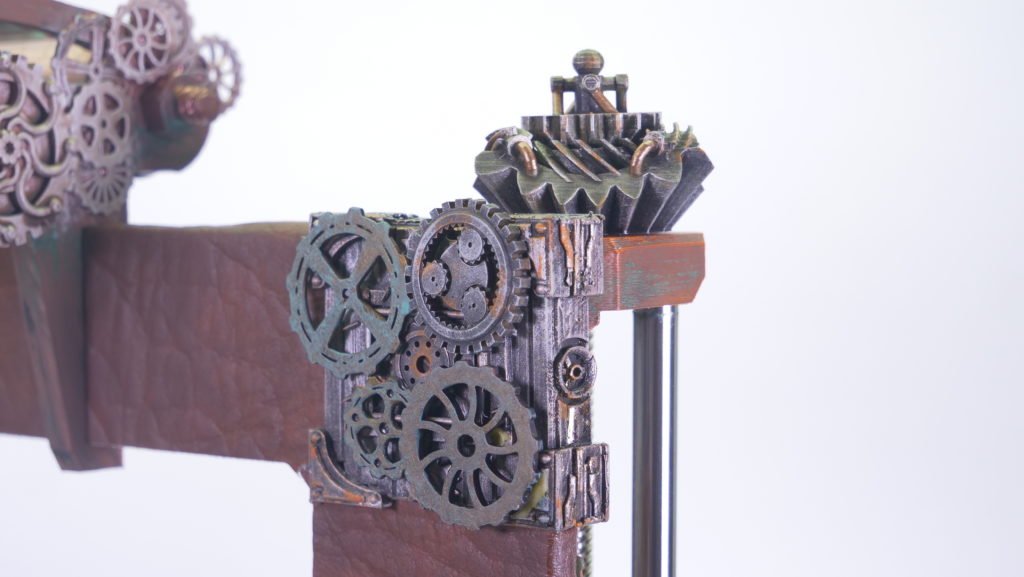 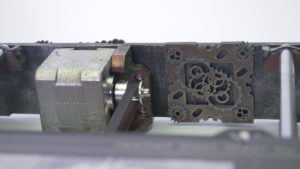 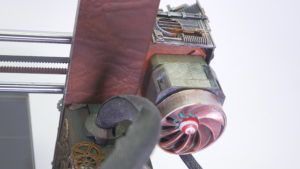 Motors on all axes were also painted with a chrome spray to complete the overall look. Rust effect was added and the last details were achieved with faded brown washes. Washing is a technique based on smearing applied color with a paper towel, which leaves tiny bits of color in places where it can’t reach. 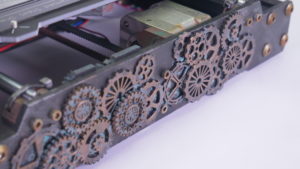 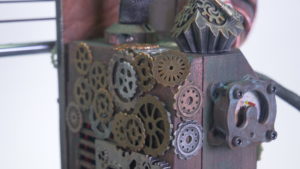 All parts of the printer are equipped with gears that inherently belong to steampunk and there are over 120 pieces in different shapes and sizes. 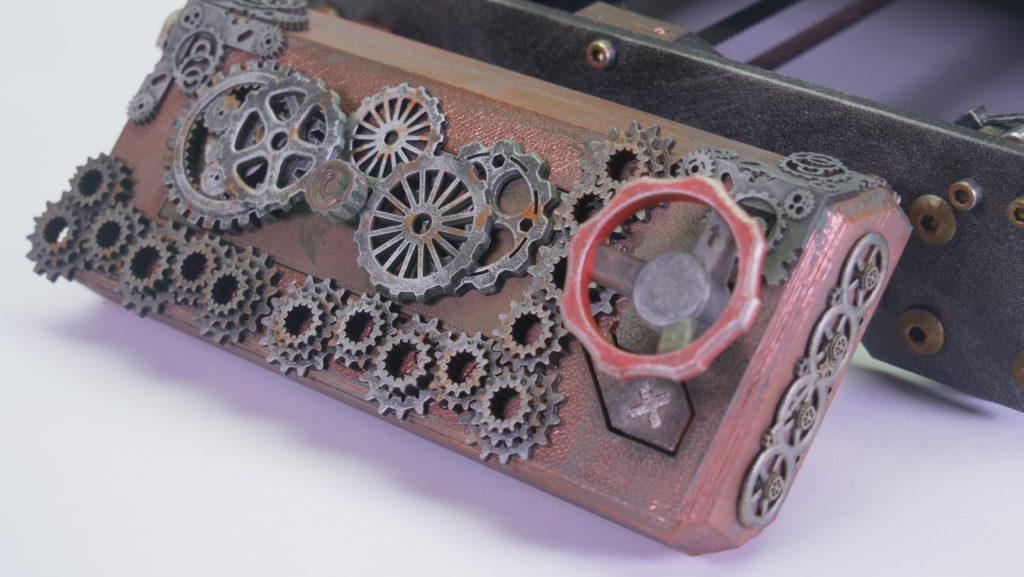 We made a cover for the screen – the display with its bright blue light doesn’t really fit in the overall steampunk look, so when you don’t need to use the screen, you can simply hide it. 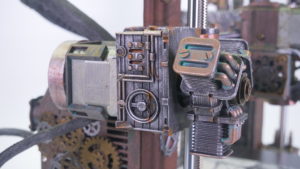 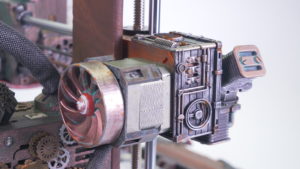 In addition to the visualizer on the extruder motor, we also decided to improve the look of the X-axis motor – on both sides, actually. We used the same element on the back of the motor as on the extruder. The front element is made of a modified dice box combined with a part of a gas mask. 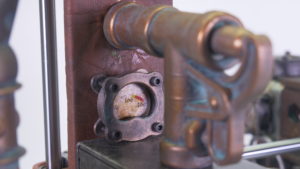 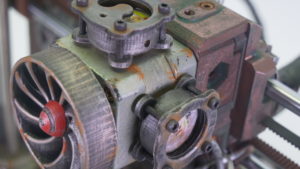 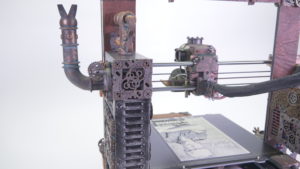 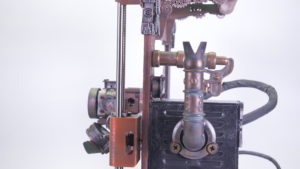 We have also added six period gauges to the printer that complement the design of a steam engine. Plus, there’s a little chimney mounted on the power supply. 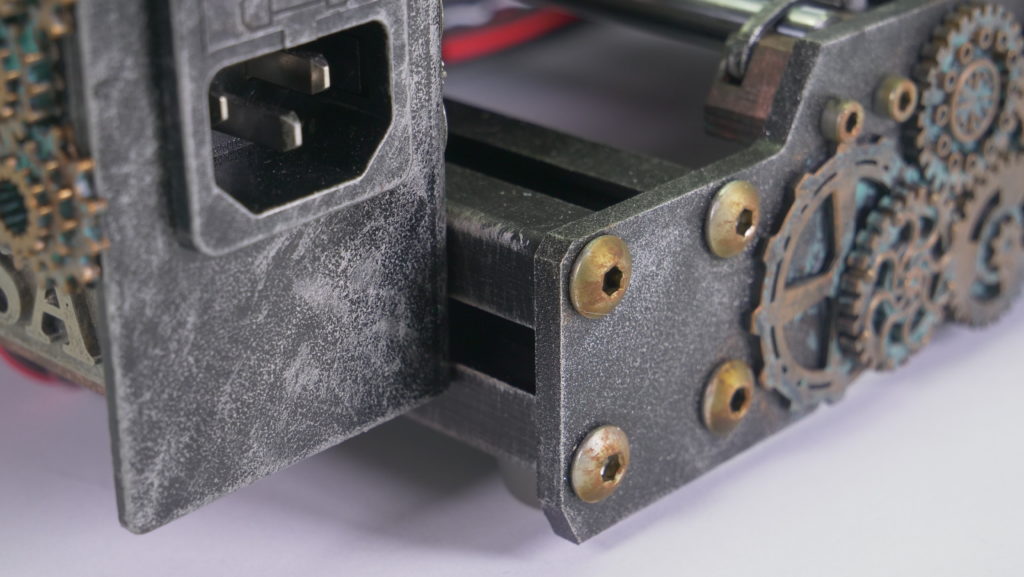 And we haven’t forgotten to modify the screws! We used the previously mentioned methods (like washing) to achieve a rusted look.

All the parts that were used for this printer can be found at Prusaprinters.org. If you have modified your printer in some cool way, be sure to share it!  Of course, we plan to prepare more modded designs of our Original Prusa 3D printers in the future. Stay tuned!