So 3D printing has pretty much been the same for the last couple of years. The technology is here and as I already said for many times, everyone (I can vouch only for me though) should be trying to make it as user friendly as possible. Sometimes it is difficult to explain this philosophy to 3D printing newcomers. We are making things which already exist better. I don’t much like the idea of adding gimmicky features just to stand out in a spreadsheet like comparisons.

I am stoked as it seems like it’s starting to work out. I would never expect reviews like we got in the last few weeks in my wildest dreams! We are Tom Approved now after all! We formed an exceptional community spanning from our forums, through facebook to Reddit, thousands of MK2 users spread their experience!

Now it is finally time to do something new. Something I had in my drawer long before I switched to 1.75mm and the Original i3 kit was widely known 🙂 In 2015 we were just competing in a 3D printer shootout here in Prague with the old trusty 3mm i3 and we didn’t finish up spectacularly good. Hurt ego can sometimes be a great source of motivation. So I got into playing with new parts and the more importantly 1.75 mm filament. This ultimately led to the “MK1” but in the meantime, after realising how much more versatile the 1.75mm filaments are, I couldn’t resist trying out Y shaped bowden splitter enabling two materials in one hotend. So on May 25th 2015, our loyal test printer named Kenny received this magnificent upgrade. 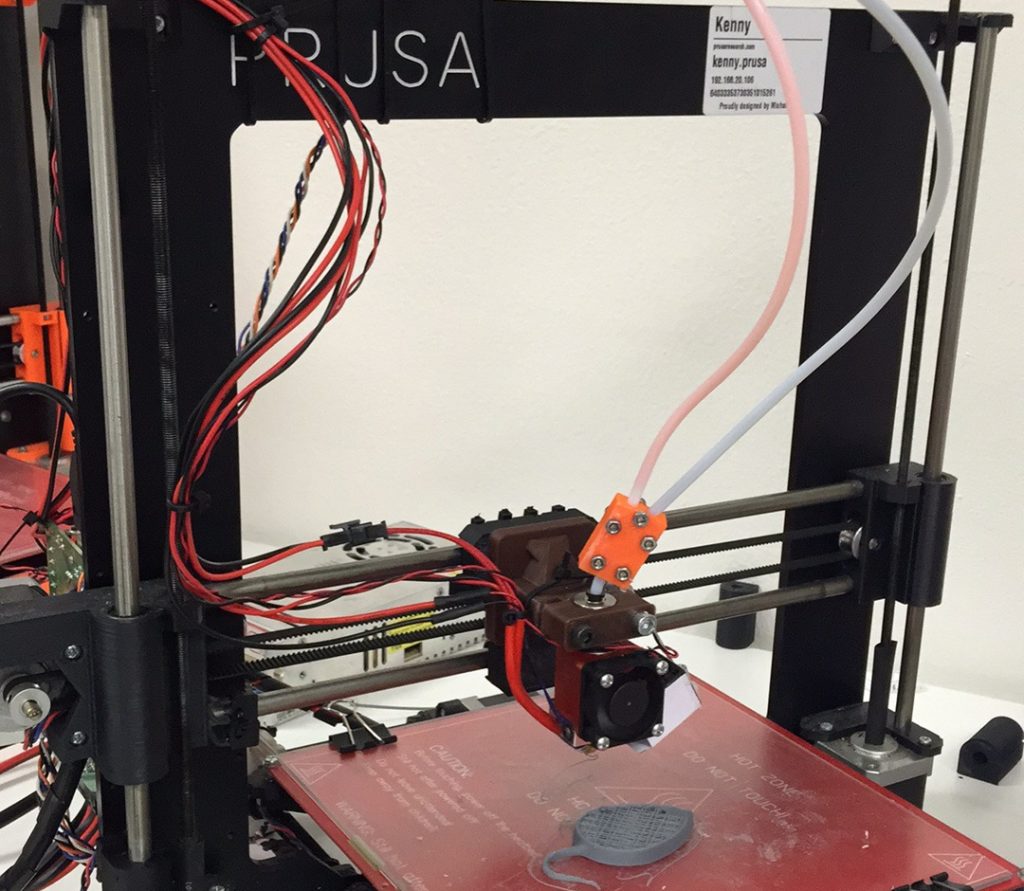 Kenny, the i3 test bench with Y bowden splitter

Exciting times! I got it working reliably enough to print couple objects including a dual color dice! 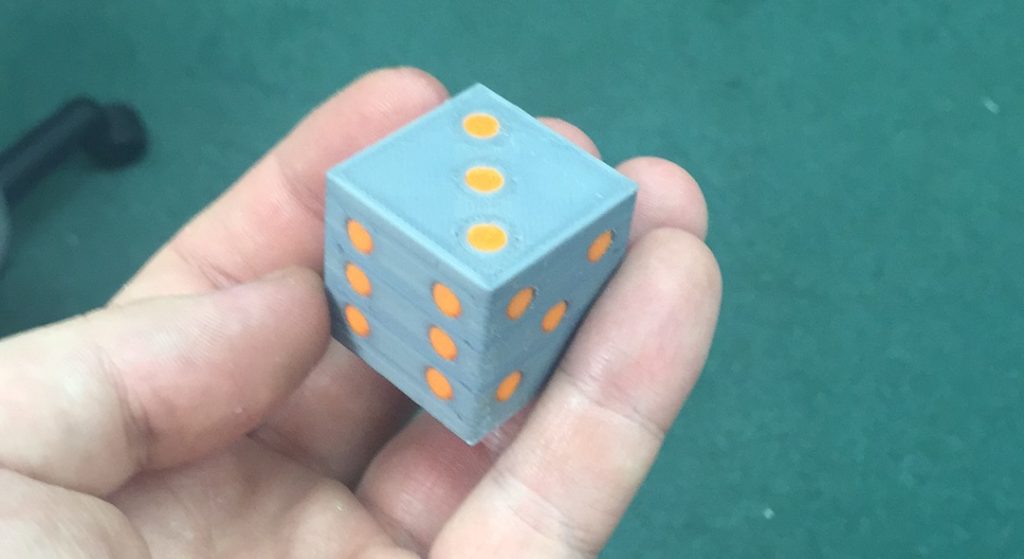 Back then there were many things I couldn’t solve by myself, like how to store the excess filament during the cleaning of the nozzle. Take a look how it was printing!

Project got shelved and I worked on the “MK1” with my brother Michal until it was released on August 26th 2015 (http://prusaprinters.org/prusa-i3-is-now-1-75-mm/). Fast forward to 2016, the team got more devs and with MK2 being so successful we are ready for increasingly more daunting tasks.

In meantime few others showed up with the similar idea but it never got enough traction. Prusa Research is known for perfect documentation, firmware/software integration and together with our awesome support we can make this happen. EDIT: There is one honourable mention, and that is Davide Dalfiume who apparently predated us by far. EDIT2: And MarlinKimbra with the multiplexing board. EDIT3: And Adrian Bowyer predated all of those previous mentions. Check it out.

Let’s take a look at how it was done previously on other printers with dual extruders. Adding just second material (that was often the maximal limit of electronics) ment adding second complete extruder assembly including hotend. This introduces plenty of problems. Increasing the weight on the extruder carriage. Twice as much wiring. Twice as many things that can break. Reduced build volume by at-least the distance between the nozzle tips. And the most painful at the end, the incredibly hard calibration. 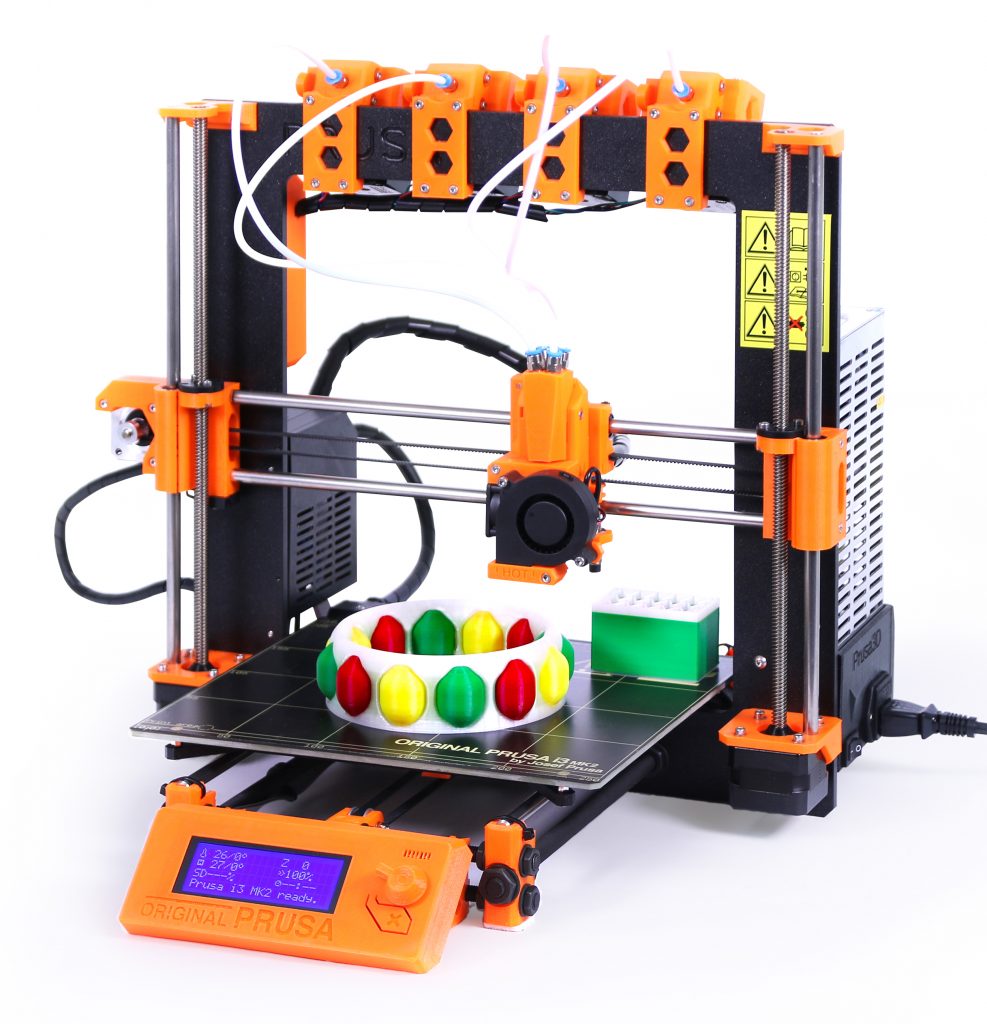 When we move to the printing itself, there is always a problem with the second hotend as it will slowly ooze material and embed it in the printed model, ooze shields were created to fight this problem, but they don’t work on bigger models. 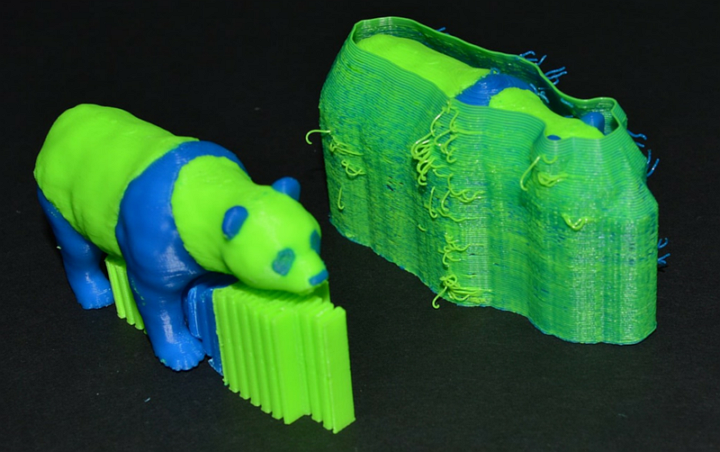 Upgrading the number of materials to 4 added a lot of unexpected complexity. First challenge was how to connect all the motors. As always we want to provide upgrades to all our users. But the RAMBo mini which we use only supports one extruder stepper by default (by design there is no need for more heaters and thermistors in the multimaterial upgrade). Replacing the motherboard would be costly, not to mention there is none with support for 4 extruders around anyways. I got an idea and after a few tests  it turned out it is entirely possible to multiplex the motors. Sometimes simplest solutions are the best. So we created specialized board which does exactly this. It can be even expanded to multiplex more motors, but let’s leave that for the future.

The second problem we had to overcome is where to store the excess material during the filament changes. At the beginning of the change, filament is quickly rammed so all the molten mass is extruded and then quickly retracted out of the heater block. This ensures minimal residual material before inserting next filament into the hotend. Smart wipe tower still needs to be generated to prime the hotend and clear the residual pigment though.

It needs to be smarter than any slicing software achieved before. If you have only two materials, there is only one material change per layer and you can get away with simple “layer change” script. With 4 materials, the whole gcode is analysed before to find out maximal number of filament swaps during one layer. This determines the number of “slots” in the tower and ultimately it’s size. If the number of required slots reduce during the print, tower will shrink and will not be generated after the last change is done. It is pretty smart™

The whole process is stupidly simple in theory, but devil is in the details and execution. But I am 100% positive, this is the future of multi material FDM printing. 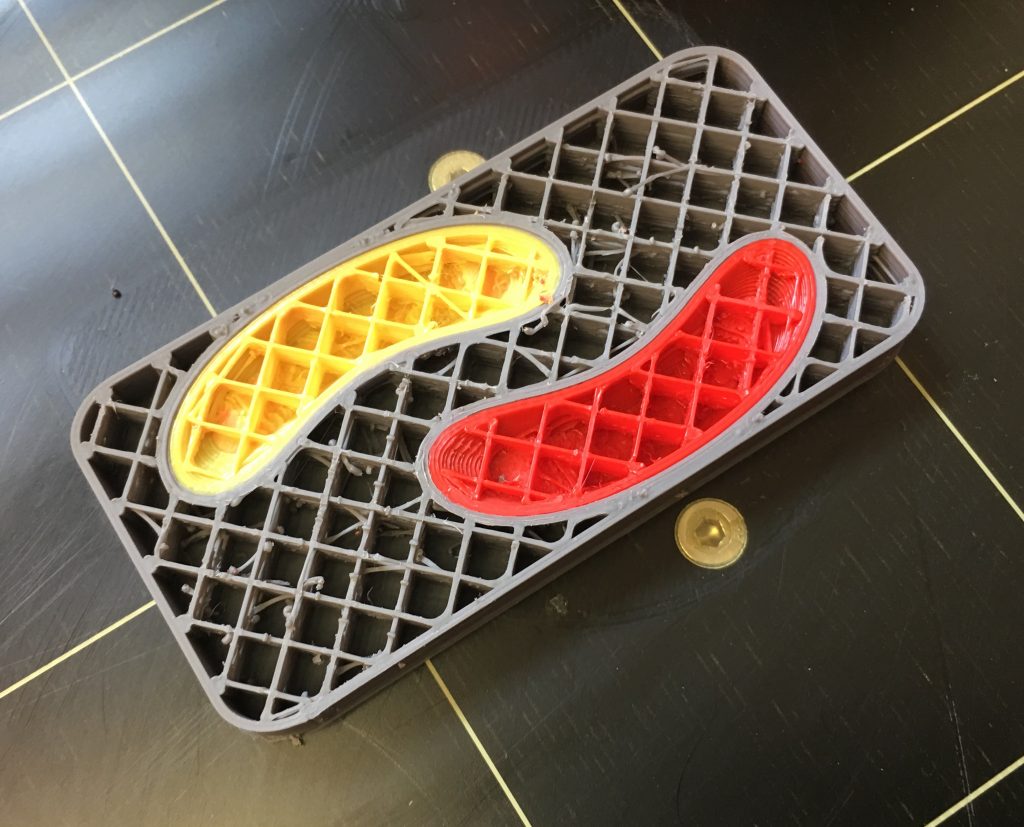 There is a number of key advantages:

There are few disadvantages:

When, how and how much 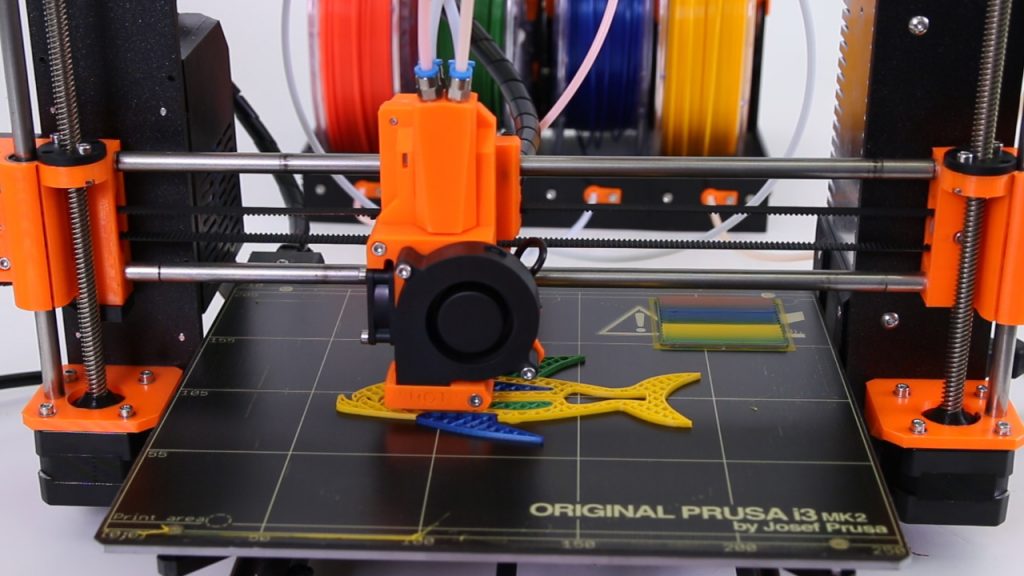 Well first thing I need to tell you now, creating 4 material models is hard and there are almost none on sites like thingiverse. Making truly multi material objects isn’t as easy as applying a texture. Each material needs to be a different object and all need to interconnect in 3D space. In this sense, the 4 material version is only for advanced users. However, a lot of our users love ColorPrint and this upgrade enables fully automatic color changing for 4 colors, this alone is an incredibly helpful feature.

We decided to go with beta test first, after all this is vastly different than anything available and I believe it is the first 4 material solution ever which goes beyond prototype.

All beta testers are chosen.

Update 1/8/2018: It is a long time ago this when I wrote this article, and there were a lot of changes after that, so some information became obsolete. I’ve updated the article (original info is ) and add new prices and links. You can also check the first and the second update article about Multi Material development. There is also an article about printing soluble interface supports with Multi Material.