So it has been three months since we started shipping the MK2. I would like to give you guys a little update and show what we already managed to improve during this short period of time 🙂

We weren’t quite ready for this kind of increase in orders. Thank you guys! We basically had to double our production rate during one month and together with new printer design, it wasn’t easy. Fortunately we had a new arrival to our team just in time. Martin, with great experience from large scale manufacturing Foxconn. Finally, as of now, we were able to lower the lead time to 0! YES!

But before we start, let’s take a look where we already shipped Original Prusa i3 “MK1” and MK2. 90 countries! WOW!

The map shows every ZIP code with one or more Original Prusa i3s MK1 or MK2. The map doesn’t contain any sensitive data. If you want to see the map in bigger screen, here’s the link 😉

Printed parts were the first struggle. You just can’t increase the speed of printing to produce twice more parts. This was our limiting factor at the beginning. Even though we were already test building MK2s in house for a couple of weeks prior to the shipping, we quickly realised that parts that are strong enough for our guys in assembly aren’t always strong enough for real world builders.

When I noticed couple users having problems with the parts I jumped in and started tweaking. First thing I had to do to be able to optimise the printing process was to standardize the print farm, we had switched the farm to MK2 completely. This took roughly a week and I started to prepare other tricks I had in my sleeve. Before that we had a mix of various 1.75mm revisions even including old prototypes and some really really old 3mm versions at the farm.

I called our filament factory to mix a new color of EasyABS matching our signature orange. The material has better layer bonding and on the MK2 we can also push the temp higher to increase the strength even more. If you are curious, we are running them at 270°C and print speeds are between 2.5 to 3 times faster compared to stock settings in Slic3r.

Another improvement was to make the parts which were breaking selectively stronger. Simplest way is to place very thin 0.05 mm slits into the problematic area. This forces every slicing software to fill the area with perimeters and effectively making 100% infill where needed. 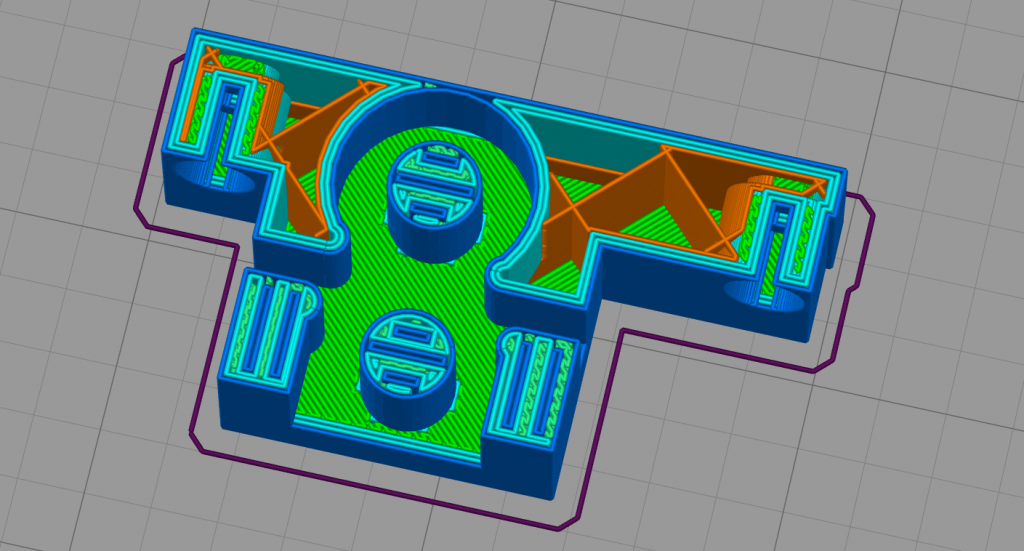 The actual print time of one printer is around 20 hours. That is pretty awesome considering the giant parts like PSU and LCD cover. The farm is now fully populated with MK2s and the daily yield is around 50 parts sets. As a bonus, we save a lot on the ABS juice now 🙂

We also had to develop our own print monitoring software monitoring available print time utilization, farm space utilization and gcodes success rate statistics. But I’ll write about this sometimes later in a separate article. 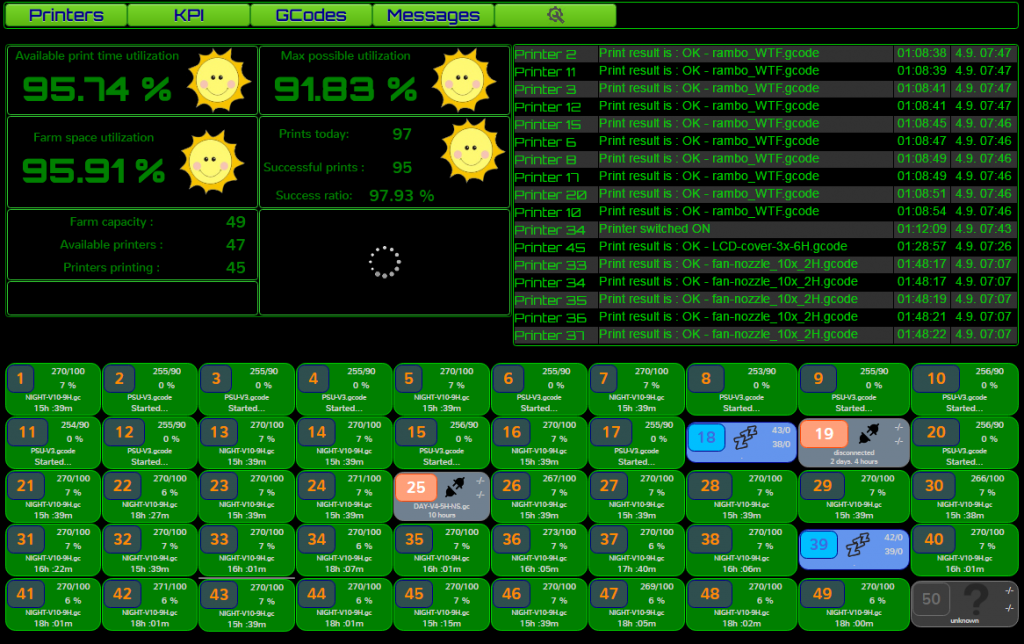 We were idealists and thought that users use our print profiles. Oh boy we were wrong!

The very first printer which was shipped, the user downloaded a random 2-year old Cura from internet and used config for a clone of Prusa i3. This unsurprisingly damaged the printer so we started putting more safety measures into the firmware. We managed to patch almost everything during one day even at the cost that printers were running the calibration twice. Twice is better than none at all 🙂 At least for a poor scratched PEI sheet.

We bought all the PEI available in Europe until the next production run in 4 months so we have enough for manufacturing and you can buy replacements on our e-shop. Be careful with the PEI though, no chisels, no knives, no xacto blades, … sharp spatula with round corners is your best friend.

With other parts, we don’t have them on the shop as we are bound to sell them at MSRP and can offer them cheaper to our customers when contacting us via email or in the case of the MK42 heatbed we simply don’t have enough to sell to general public and reserve all for production and occasional replacements. This should get better over time as we are getting more suppliers in. 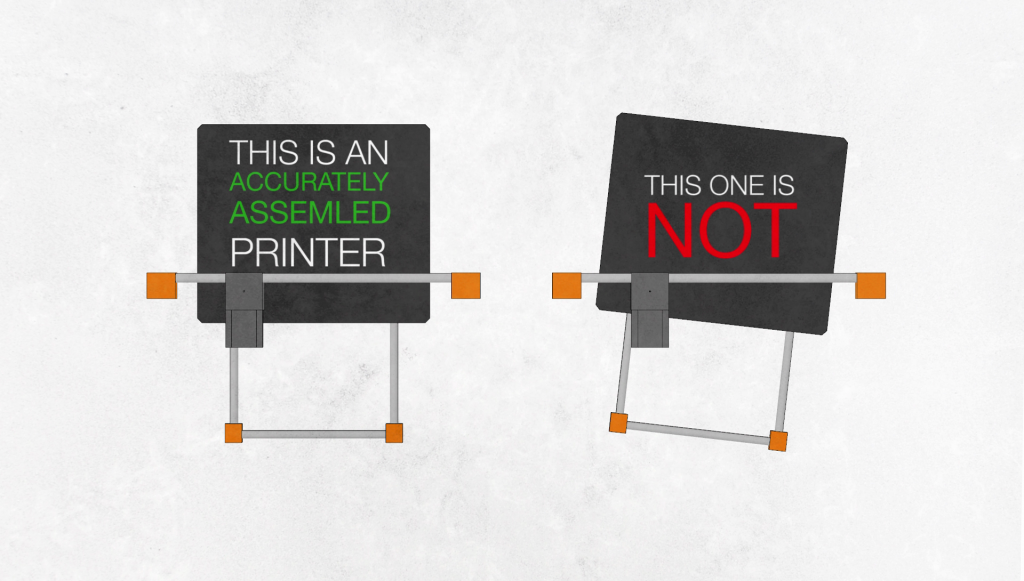 Since then we are working on a new firmware, which can detect the exact position of the calibration point on the MK42 bed and save them for later calibrations. This means, users can be less precise during their build! It is basically a black magic! Thanks to this feature we later found out that we can use the very same data to compensate for non perpendicular X and Y axes. If you build your printer in a way, that X and Y are not precisely at 90° your objects will be crooked, but not with this function on the MK2. It is also present in the firmware since version 3.0.6 (3.0.8 is the latest at the time article was published) and it is pretty much revolutionary. Read more about the 3.0.6 and the new calibration flow. We also wrote an article about the magic how the firmware can correct skewed geometry on imprecisely built printers. 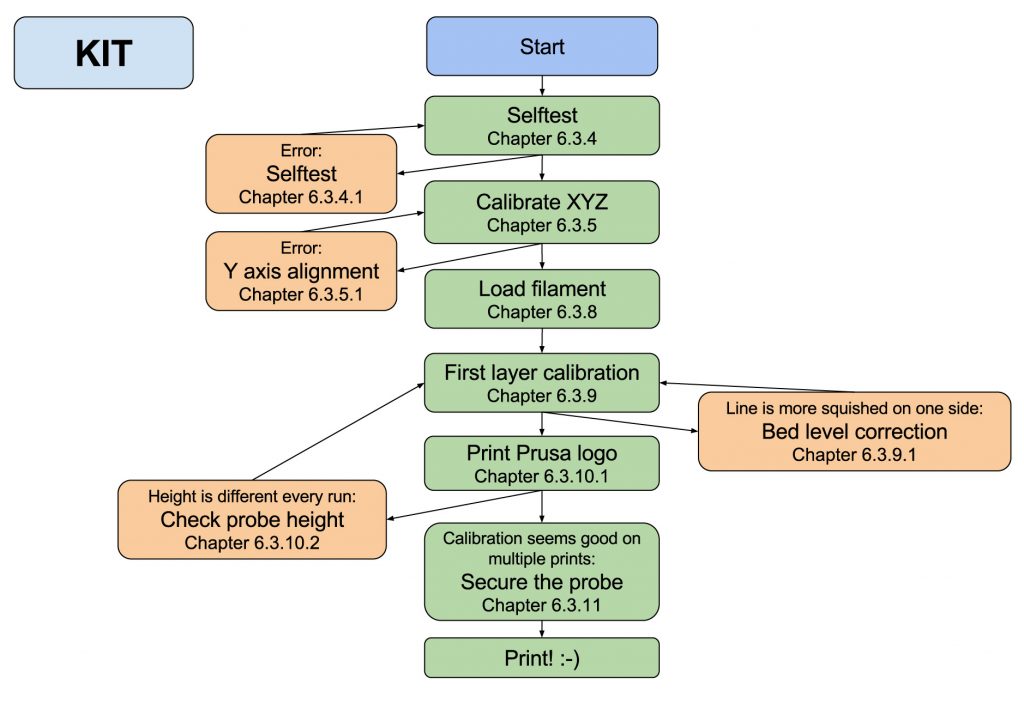 You can take a look on the whole calibration process in our latest 3D Printing Handbook. Next step is to design a printer completely out of a cardboard, dental floss, hot glue and let the firmware compensate all the imperfections 😀

We applied for EV code signing certificate, so drivers starting with 1.7.3 will always be signed. No more red screens and warnings, yay! This also allows us to sign the USB serial driver and later the Win10 3D printing support when MS guys release the new SDK version I developed the printer settings for. 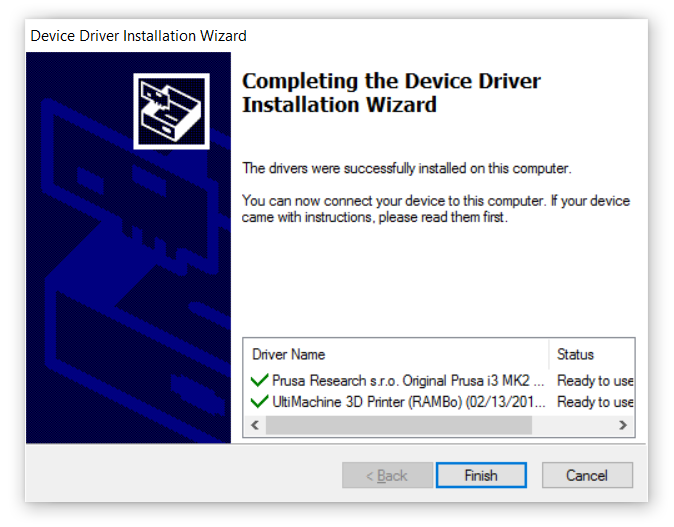 The Original Prusa i3 MK2 has its own USB ID, and from drivers 1.7.3 you can see it in the device manager under its proper name and on all versions of Windows.

I am continuing to tweak the slicer presets and test objects and we already have a full time developer on the actual Slic3r itself. Vojta is great! We now have much more stable version of Slic3r that even includes grid infill! 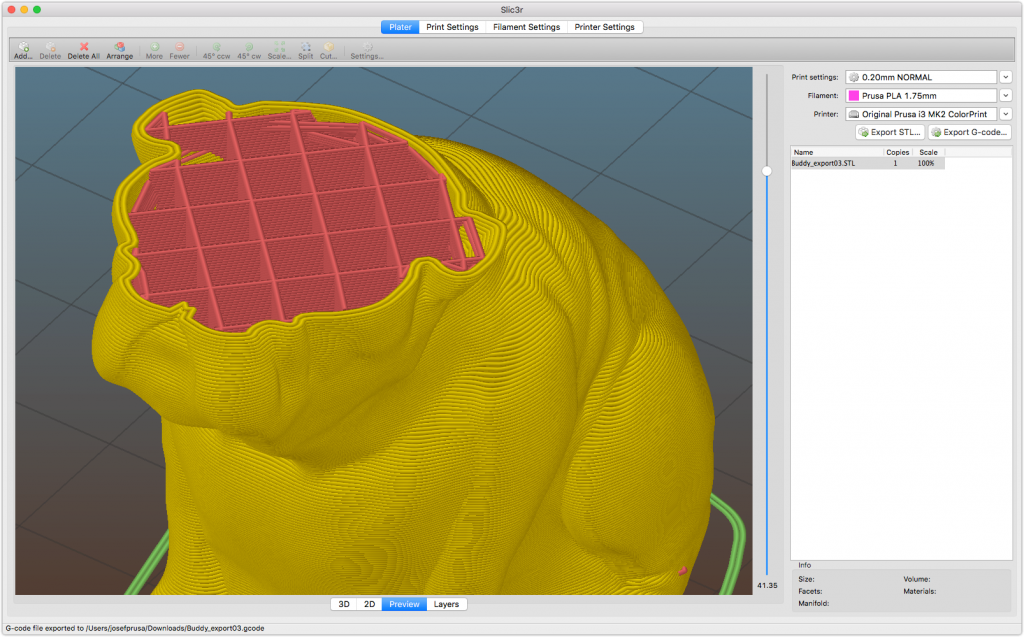 The 64bit version allows you to print more complex models and has faster export times. As a little bonus, it now has anti aliasing. It also has fixes for cut function and send to octoprint functions.

We originally started shipping the printers with fancy calibration script printing circles and possibility to select which turned out the best. This proved to be too complex for newcomers to 3D printing. We eventually created V2 calibration, where the nozzle just prints a zig zag pattern and user slowly lowers the nozzle until he achieves the optimal height. It’s a bit like landing a plane. And as already mentioned in Firmware chapter, starting with 3.0.6 firmware (3.0.8 is the latest at the time article was published) we created a new calibration flow that should solve all the user problems with calibration. Hopefully everything will be smooth from now on 🙂 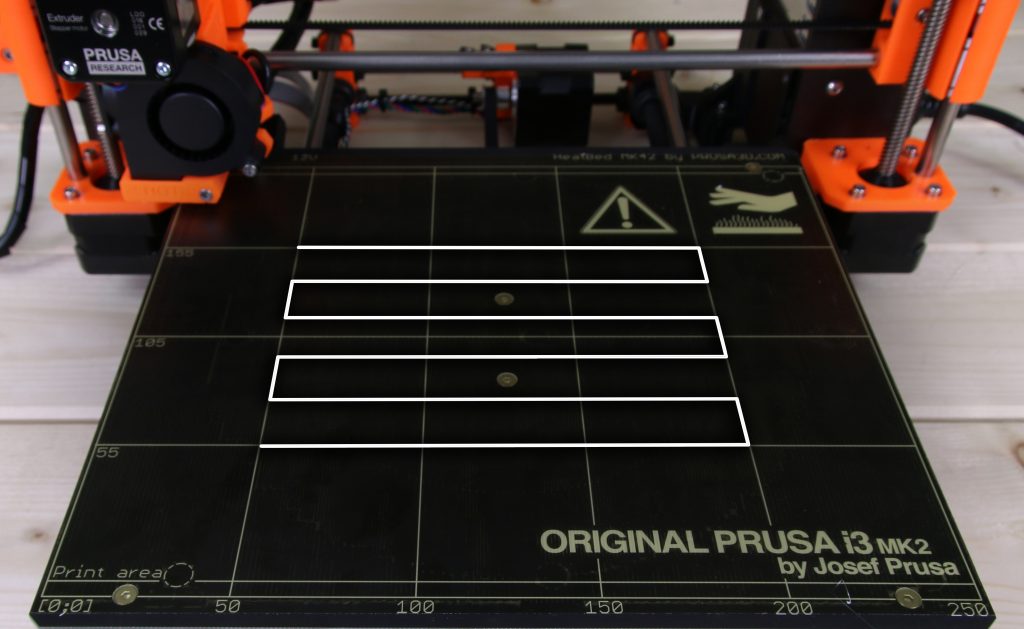 V2 Calibration being printed on the bed

You can check out some of the prints from MK2 on our site. Feel free to send us more of them.. 🙂 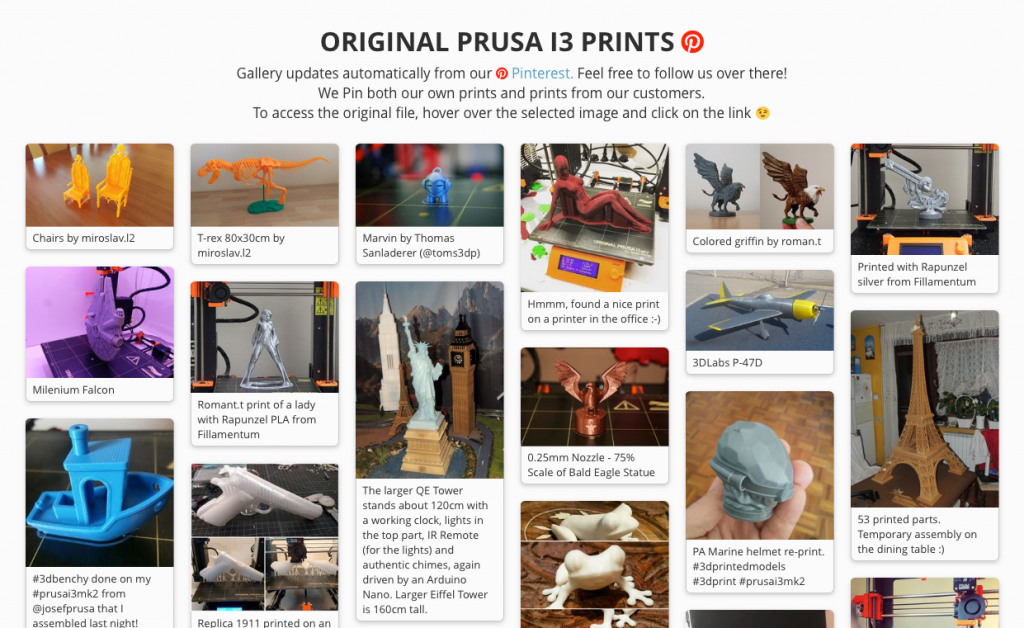 I am extremely grateful for the positive attitude towards the MK2. For example everyone who asks what Prusa i3 to get, gets Original Prusa i3 MK2 as an answer from the community. Same happens on the Facebook. Best thing is, there are reviews to back it up. Just check out the awesome reviews over at review thread on Reddit. Or see the live build from Thomas Sanladerers MK2 live stream.

We have increased the numbers of our customer support and packing team, there are 15 of us right now! We are working 24/7 to help you out anytime you need help, are lost or just want to chat, come and drop us a line or two. 🙂 Since the MK2 release, there has been an incredible number of 8,306 chats with you all and we are glad that you are so active because with us you are never alone while 3D printing. Moreover, almost 20,000 e-mails arrived so the team is always busy, just as we like it. Thank you! 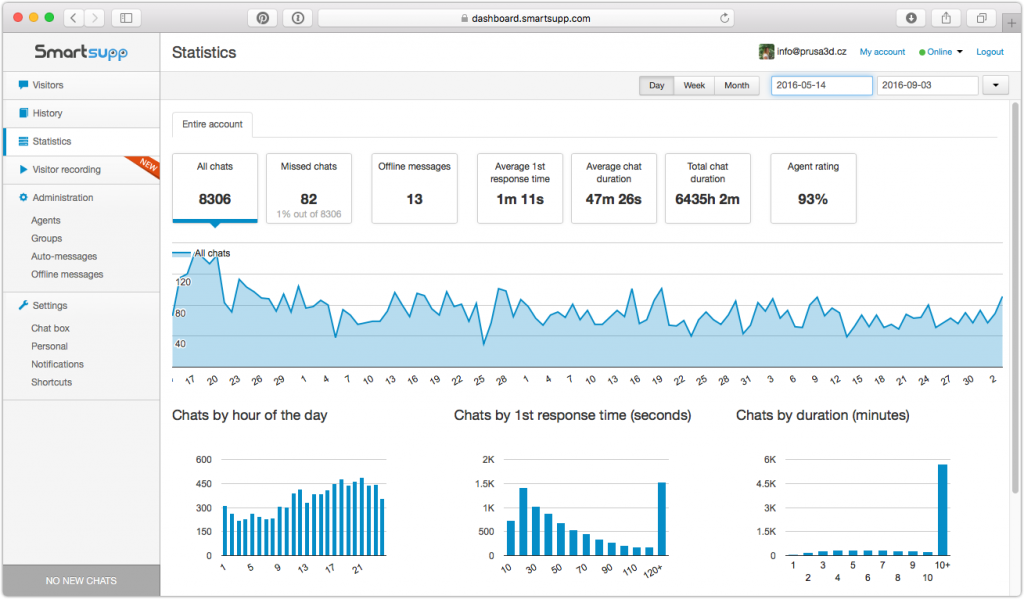 We use all the info acquired from the customer support to constantly improve our manuals. 3D Printing Handbook is already at 4th version and assembly instructions had countless updates and improvements since the release 🙂

News about the release stormed the internet – soon it was translated to several languages.  Russia, Italy, Poland… This one is in Chinese I think… We got covered on Hackaday in a very nice article and on most of the 3D printing servers. We got interviews on major 3d portals like 3DPrinting industry, 3Ders.org, 3Dprint.com or 3dprintingcenter.net. Thank you. Also Prusa i3 finally made it to Wikipedia… 🙂 And if you like watching interviews, try this one with 3D Printing Nerd, there’s a hug at the end 🙂

Thank you guys for your continuing support! As a little gift for the delay we added a nice ColorPrint bottle opener test model to our 1.7.3 drivers, so you can print it out and relax with a nice bottle of beer 🙂 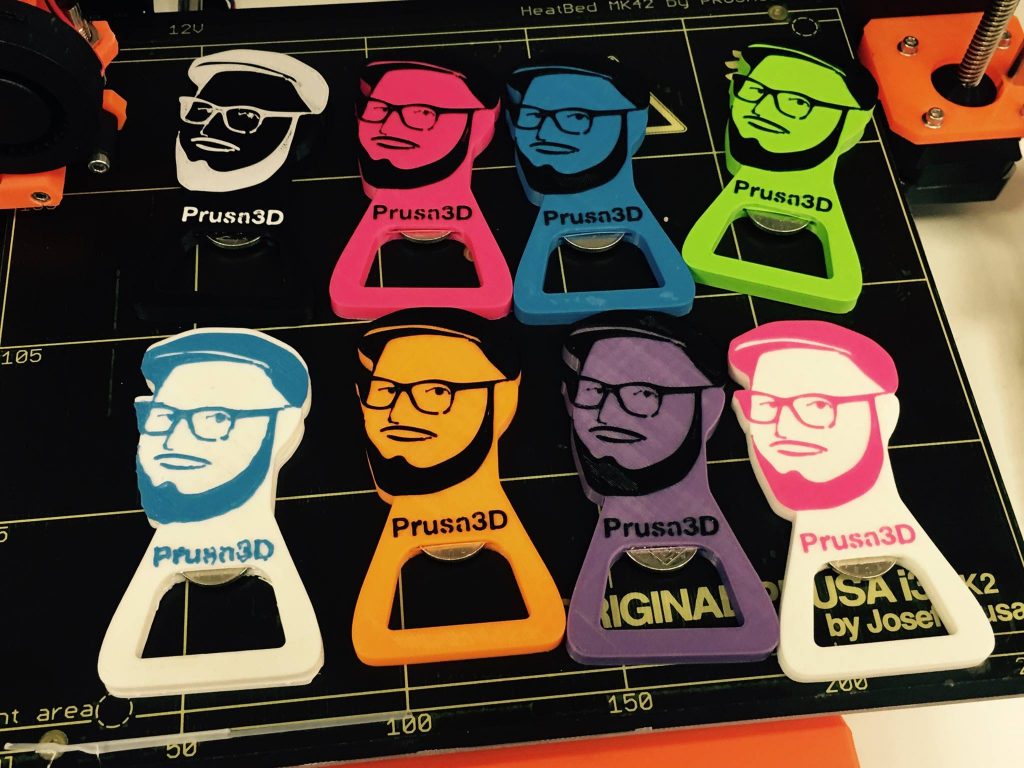