Original Prusa i3 MK3 after 2 months

It has been almost 2 months since the first MK3s left the factory and it has been our most successful launch ever. For maybe the first time we managed to launch on time and sent almost 2000 before Christmas. However there were a couple of “gates” along the way, so let’s clear everything up.

Compared to the MK2 launch, it went pretty smoothly from our standpoint, what was different was the much greater number of the printers shipped and ginormous community of people anticipating to hear the first words, this made it almost impossible to manage the feedback and all the posts. In a few instances, we had some sort of mass hysteria with many people, without actually having a printer, joining in over completely benign “issues”. Not being able to manage this was the single biggest fail of the launch. Lesson learned, with next product I will limit the number of units shipped in the first month and ship preferably to longtime users. This way the community will get better chance to get to know the printer better before the huge influx of first-time users arrives. It will lose the feeling of beta testing as some users suggested. But in fact, we were polishing the hardware and firmware for many months. First two Alpha units were shipped to MAKE magazine test in early May for example. Where together with MK2S and MK2MMU we scored first three positions. Since then we had additional 6 months for polishing.

You can do all the testing in the world, but after the launch, the real world shows you what else you need to test. What is the most important, however, is to work with the feedback and continue with the improvements after the launch.

Early firmware versions had reduced power to Z motors when the power panic was tripped to save time. This works when the printer is very nicely built. Every little misalignment may mean it didn’t have the power to raise the Z axis, even though it worked perfectly during printing. We increased the motor current to normal in RC4 firmware which makes the power panic more robust. Test it out ideally with a power strip with a switch, yanking the power plug may produce arcing and trigger the function multiple times, rendering it unreliable.

We use the same print settings as we used on MK2S optimized for sturdy functional parts, so I was kinda shocked how many people mentioned the print quality. Possibly the switch to PETG may affect the look of the parts top layer with its high gloss. Some macro shots of the black parts might look horrible, while the parts dimensions and strength are perfect. However, I decided to slow the prints down, lower the layer height and make the parts prettier at cost of the higher print time anyway. We will just add more printers as we have more space 🙂

We are also continuing to develop the parts to remove some of the annoyances. Among upcoming updates are reworked X-carriage with belt holder system similar to the one on Y-axis and X-end-motor with the integrated belt tensioner. Once these parts get through our testing, they will be put into production and available on our website.

As always after a fresh release, there are some adjustments and we try to bend the firmware so it is most intuitive for users. There is still a lot of development. We shuffled around menus so they are more user-friendly. Autoloading was confusing people, so we added menus explaining it more. We did the same with MK2 where we originally shipped it without the XYZ calibration and everyone needed to build the printer precise enough so all 9 points were precisely hit by the probe. Many people found this stressful so we developed a way for printers to adjust to their build. 🙂 We are doing the same now.

We are currently working on an issue when in some cases, especially when printing from OctoPrint, printing gets a bit sketchy. When we looked deeper, the Linear Advance seemed like the culprit, and partially, it was. But when we analyzed it more, the stepper routine we implemented can apparently cause layer shifting when it switches between the step grouping modes. It normally sends pulses to stepper drivers by one, two or four; according to the speed it is moving. This is also affecting the MK2, so it is a good thing we found out about it. With little optimization, we were able to get one MK3 moving at 350mm/s. This needs more testing before release though. So, for now, we have RC5 firmware ready, which temporarily disables the LA code and caps the speeds at safe levels preventing the printer from reaching that state. The hard limit is set at 200mm/s for NORMAL mode, 172mm/s for STEALTH mode and jerk speed was lowered to 10mm/s. I will just mention that you shouldn’t be too worried about the temporary disabled LA, with stock print settings (the external perimeters print at the same speed as MK2, only not visible infill is at 200 mm/s) and a better stiffer Bondtech drive mechanism its effects aren’t as noticeable compared to MK2.

We got a lot of great feedback regarding the usability we want to implement. I will not lift the RC from the firmware version until we work them in. This way we can be sure people are regularly updating. One of these things for example is a great idea to have icons on the main info screen showing you at single glance the current print mode, crash detection and filament sensor status. If you got ideas similar to this, do not hesitate to e-mail us with them via e-mail and “Firmware improvements” subject, so they can get to our developers.

Yes, we did not ship with the most optimal settings and test files. I didn’t check the settings myself, which was a mistake. All were addressed in the previous drivers 2.1.3 that include new sample objects. The cooling performance was vastly improved and a slight over extrusion was also solved. Do not forget to upgrade regularly.

We’ve had some users report to us, that the thermistor cable got pulled inside the electronics housing or broke very quickly after assembling. After seeing what happens on the groups/forums with every little problem nowadays we switched to our old stock from a different supplier we had on MK2, but after more testing we found the culprit was the spiral wrap. Some pieces grab the cables when an axis is moving and pull on it. We decided to switch the Y axis to braided cable sleeving. The easiest remedy is to remove the spiral wrap and nylon filament from the heatbed wires, which completely prevents this from happening.

Oh, and during our investigation we created more robust cable holder part. You can easily print it yourself (heatbed-cable-cover.stl in Original Prusa i3 MK3 files) and use fasteners from the spare bag.

If you have trouble, check your belt status according to our Handbook (Chapter 13.4 Loose X and/or Y-axis belts). This gives you an overall idea how smooth the movement of the axis is. To test it out, pinch a smooth rod with your hand and let the x-carriage crash into your hand. Pushing will not work, especially if you push in the direction of the movement.

Also check if your belt pulleys are properly secured on the X and Y motor shafts, as crash detection cannot detect a slipping pulley. When this is the root cause of layer shifting, it usually happens multiple times looking like a staircase.

Some orders went out with less hardened stainless steel HRC25 rods from good old MK2S. MK3s faster movement causes accelerated wear. You can easily check if you have got the correct chromed minimum HRC58 hardened version with neodymium magnet (fridge magnets will not work). If they stick, you got a correct set. We do replace them for free if you got the incorrect version, ideally e-mail us a picture if you’ve got grooves on your rods along with your order number.

Multiple things got mixed up together. We unfortunately made the printer too quiet, hh. First, there is the “rattling” which we found out to be the plastic insulation sheet between the PSU circuit board and its case. It is the same as on MK2/S but not as apparent over the sound of the motors. The sheet may resonate when the stepper motors hit its resonant frequency. There is not much we can do with it on the manufacturing side, insulation cannot be removed from the PSU. Some users remedied it with sliding a zip tie between the case and the sheet, but we discourage this. Little tweaking of travel speeds during calibration and switching Z motors into StealthChop will go a long way in one of the upcoming firmware updates.

Some users reported PSU “clicking”. What happens is, when you switch to high load on the heated bed the input coil winding vibrate a little. It is physics. The fact this new PSU has active PFC may make this more pronounced, especially on 110V. But you can hear it with every PSU on both 120V and 230V when you stick your ear close enough. As we are preparing to integrate our whole PSU + PowerPanic + connector assembly into one unit – to reduce the assembly time, we have a power supply specialist in-house. So we could quickly find out that this is what is going on. They are perfectly safe and they were also tested when we were getting them tested for the CE marking at the external lab. The clicking can be reduced by increasing the PWM frequency for the heatbed in the later firmware, which we plan to implement.

During our manufacturing process every power supply gets tested twice. Once when it’s assembled. Under full load, we measure the voltage, amperage and milliseconds of power it has remaining in the caps for the PowerPanic feature. See our test jig below on the photo. The second time it is at our test station, where it again fully heats up the heated bed and hotend. Everyone gets a test protocol from this second test.

I am surprised with this level of scrutiny no one noticed the heatbed clicks too. As there are magnets embedded under the heating traces, acting like a very weak speaker. Maybe we can eventually play MIDI files from the SD card one day. 😉 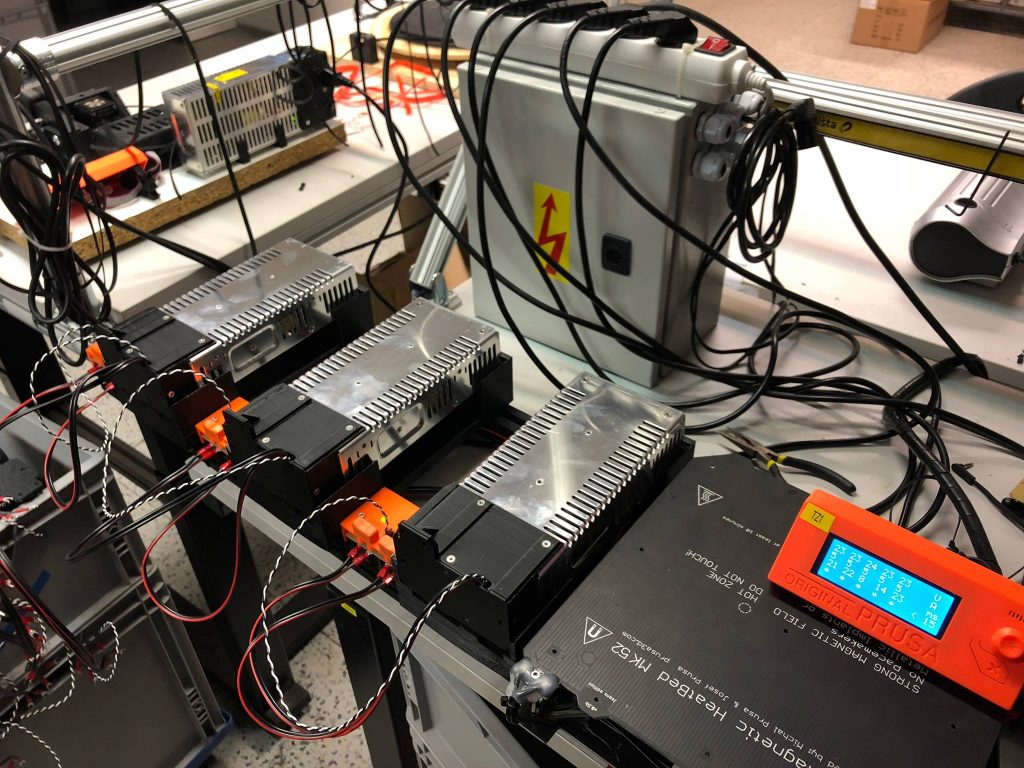 Wow, that was a very long post. I think I’ve covered pretty much everything as you see. To sum it up, all the little annoyances were easily solved via drivers and firmware updates. Parts we mixed up during manufacturing are replaced free of charge and I am looking forward to see the MK3’s bright future 🙂

Feel free to comment with any additional questions and I will update the article. Thank you all for your ongoing support and happy printing to everyone! 🙂