A little over a month ago, I mentioned that our Multi Material Upgrade 2.0 is close to being shipped. And I’m happy to announce, that the time is now! We have just started shipping the MMU 2.0 to first customers. I’m sure you’re curious about what it can do – and I can finally reveal everything that we have prepared for you!

August was a pretty tough month! Not only because of the awful heatwave in Prague but mostly because we had to wrap up so many things. MMU 2.0 went through a few last revisions and several rounds of thorough testing. We were tweaking various parts, the firmware, Slic3r PE… We didn’t stick to our original schedule, but the changes we made in the last weeks were incredibly important. Even though it meant adding a few extra days of delay, we’re sure it’s worth it. It was a huge commitment – after all, the preorders are reaching almost 10.000 (upgrades from MMU1 included)! Wow! We’re planning to ship all these orders before Xmas. Fingers crossed 🙂

You can order your own Multi Material Upgrade 2.0 at our e-shop for 299 USD / EUR (tax included). But remember, new orders will not be shipped until November.

Anyway, the result is amazing. What we have here is a one-of-a-kind multi-material printing addon that is fully integrated with the printer, so everything is perfectly synchronized and the whole thing works seamlessly as a single unit. It’s just like printing on the standard MK3 – slice the model, export the G-Code, put it on an SD card and you can start printing right away without any hassle. Plus, our MMU 2.0 is the only device that supports up to 5 materials loaded at the same time. 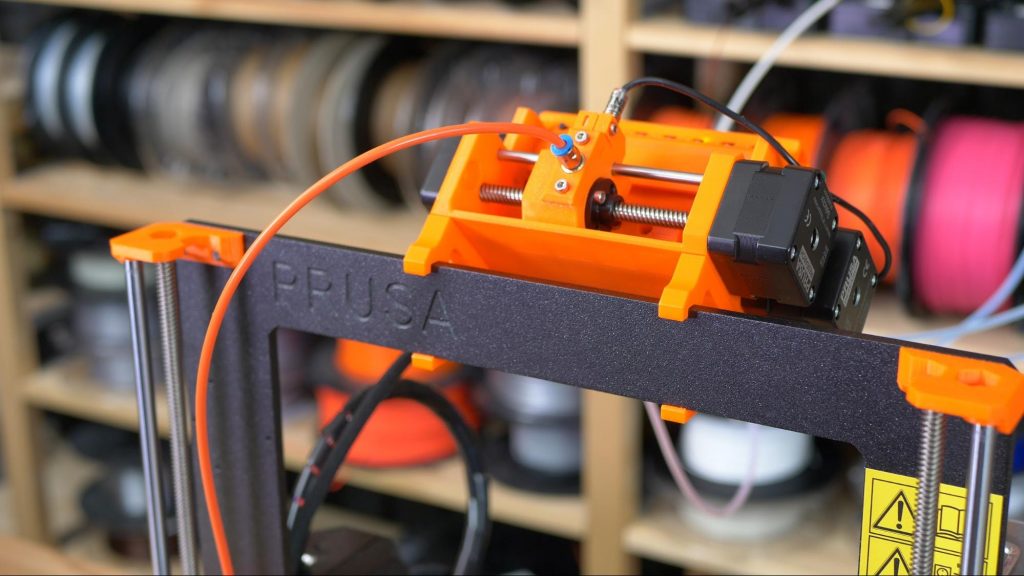 According to our recent customer survey, the first generation of MMU was well received (more than 73 % of users would recommend MMU to friends or relatives), which is really good for a first-generation device. But there’s always some room for improvement. We wanted a simpler, more efficient design. The unit was completely redesigned. We have added an automated filament-cutting blade and also physical buttons for manual controls. Here’s a quick overview of the major differences:

We have bumped up the number of materials to five, decreased the number of extruder motors to one and got rid of multiple Bowden tubes, which proved to be problematic – there were issues with flexible filaments, proper retractions, and other things. Overall, the MMU1 was quite picky regarding filament quality. So instead, the new MMU 2.0 has a direct-drive feed and a motorized selector head with an integrated filament sensor that takes care of loading and unloading filaments. It’s pretty cool to watch it go. We know that the original multi-material addon was prone to jamming (also because of the Bowden system), so we decided to fix that. The selector has a built-in blade that will cut off the filament tip if it gets stuck during unloading. As a result, the new unit is less sensitive to the filament quality, and jams should be a thing of the past now! 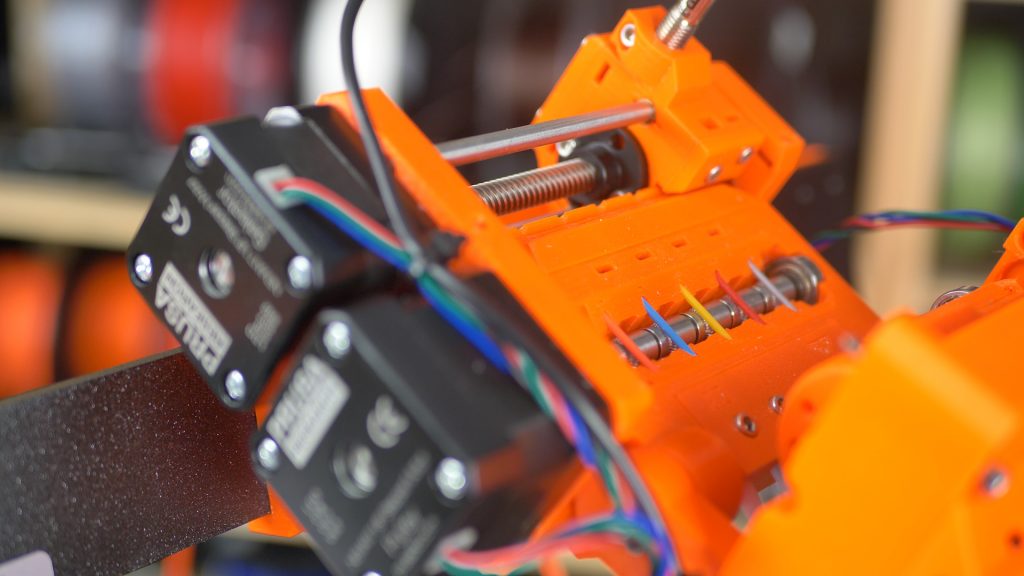 An important part of the selector is the F.I.N.D.A. probe which serves as a filament sensor. Essentially, it’s a re-purposed P.I.N.D.A. and the sensor works on a mechanical basis. When you insert a string of filament, it lifts a small stainless steel ball. Then, the probe detects its proximity, which means that the filament is loaded. And since it’s mechanical, it can work with all sorts of filaments, independent of color or material. 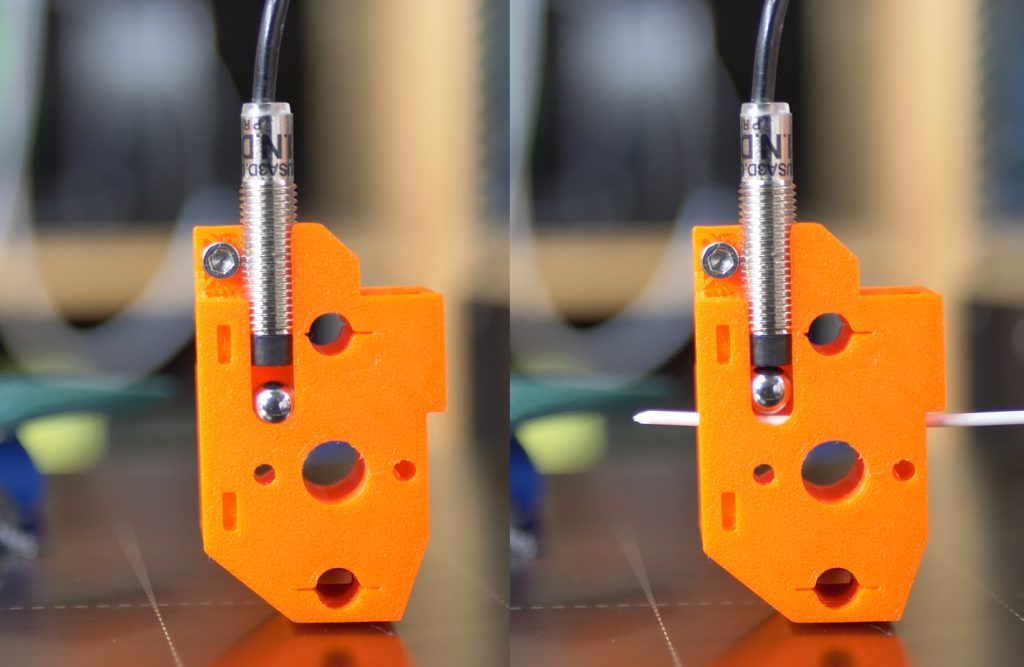 P.I.N.D.A used as a filament sensor

We also wanted to make MMU 2.0 unit very easy to operate. Obviously, a large part is completely automated, but you still have some control over certain actions. We placed three buttons at the top of the MMU 2.0 body – two for moving the selector head and one for loading/unloading filaments. The buttons also have some advanced functions. For example, you can use them to calibrate the length of the PTFE tube.

There are also five status LEDs on the top of the unit for a better overview of what’s going on at any given moment. Everything is thoroughly explained in the assembly manual and in the handbook. Yes, the assembly manual – the MMU 2.0 comes as a kit, but don’t worry, we made sure that the whole process is as trouble-free as possible. In case of any trouble, our 24/7 tech support (available in several languages) steps in and helps with whatever you need. 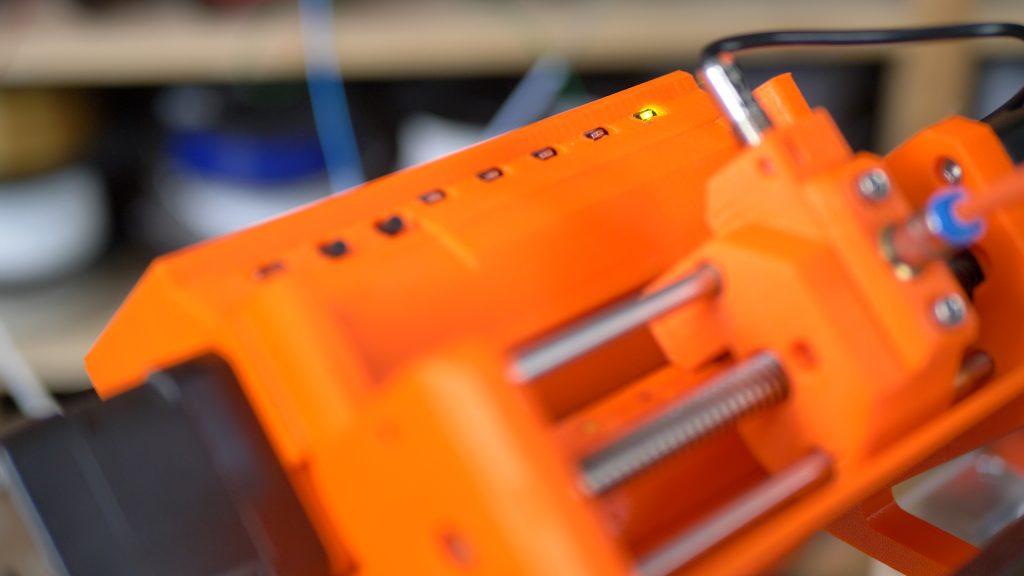 Status LEDs on the top of the MMU2 unit

We designed the MMU 2.0 unit with an easy (un)installation in mind, but there’s really no reason to remove it from the printer. MMU 2.0 supports printing in Single Mode, which works the same way as printing on a standard MK3 machine. You can have five of your favorite filaments loaded and just choose the best one for the current job. In addition, we’re working on a firmware update that will allow printing older MK3 G-codes in MMU2 Single Mode.

We also received a lot of questions about our existing enclosure – whether the printer with MMU 2.0 unit will fit. Rest assured, we’re working on an updated enclosure, which will keep plenty of previous parts (most importantly – the plexiglass) from the previous version, but some new parts will be, obviously, required. We’ll publish a comprehensive article when everything’s ready!

And just a little reminder: Don’t forget that if you own an MK2/S printer, you need to upgrade to MK2.5/MK3 first. We are offering a special discount on the MK2.5 upgrade (50 USD off) and MMU1 to MMU2 upgrade (100 USD off) for the all current owners of MK2/S and MMU1. This way, you can save up to 150 USD if you have both MK2/S and MMU1. Just log into our e-shop and get the full MK2.5/MMU2 upgrade for the same price as stand-alone MMU2. 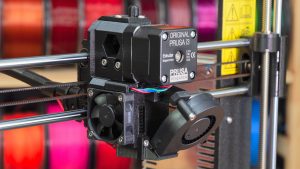 The MMU2 installation is a good opportunity to upgrade your extruder to a better one. 🙂 It features an improved cooling system, enables easier printing of flexible materials and it has some little tweaks like reworked cable management. We decided to add these new parts to the MMU 2.0 package as a little gift for our patient customers. 🙂 In case you just want those files alone, you can download them from GitHub or from our website. Please note, that the internal code for these parts is ‘R3’ (when you want to print them yourself), while the consumer versions are marked as ‘B7’ (when you receive them as a part of the kit).

In my previous article, I have already mentioned two really cool features of our new Slic3r – ‘Wipe into Infill’ and ‘Wipe into Object’. Another thing worth mentioning is the new ‘Smart Wipe Tower’. We already had a smart wipe tower for MMU 1.0, but the new one is even better – the algorithms behind it are vastly improved, meaning that a significantly smaller amount of filament goes to waste during color transitions. Plus, you can configure the purging volumes manually. For instance, if you are switching from black to white filament string, you can increase the purging volumes, since darker colors are more likely to cause color bleeding. Generally speaking, it’s possible to achieve an almost completely hollow wipe tower. 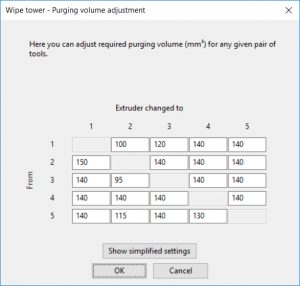 One of the new things is the reworked object arrangement system, which will help you to distribute imported objects across the print surface more quickly and efficiently. Previously implemented automatic arrangement is replaced in the current build by a brand new one, which is based on white papers from svgnest.

The new arranging algorithm is far more sophisticated compared to the old one. Objects which don’t fit during auto-arrangement, are not placed all around, but instead on a virtual heatbed(s) to the right. Also, these objects are not sliced, reducing the overall time. We still want to update this system even further, since we would like to teach this system to use concave corners and cavities of other objects.

Another brand new feature is the “Place on face” feature, which will enable you to position an object on the print bed perfectly with just two clicks! 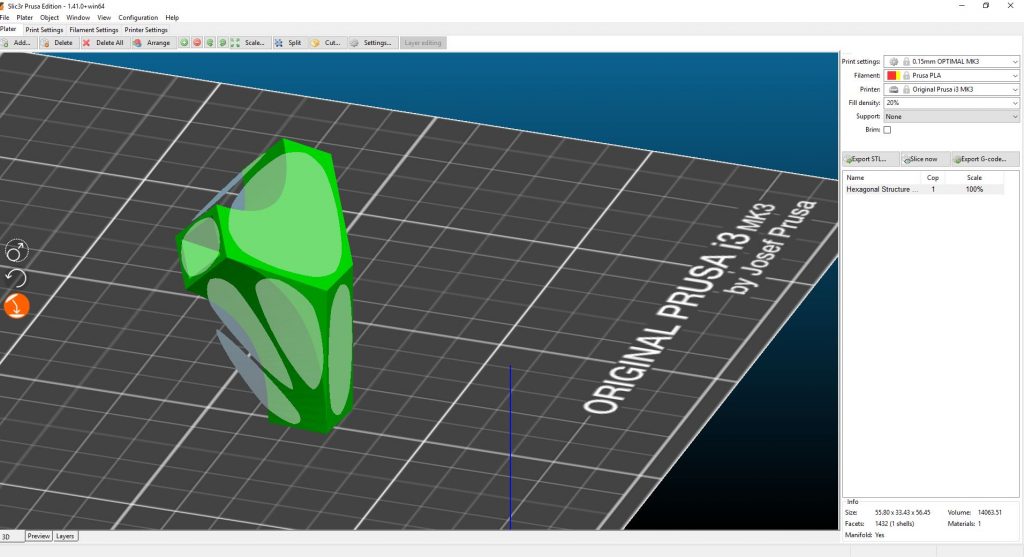 I have also promised it will be possible to display the remaining time for the print on the printer’s LCD screen. And it already works! Slic3r PE 1.41.0-alpha3 combined with our new firmware has this feature already implemented. Starting with the alpha2 release of Slic3r PE, a new M73 code is added in G-codes and the printer will inform the user about the time remaining. This value is refreshed every minute and works both for the Normal and Stealth (silent) mode. Please note you need firmware 3.3.0 or higher.

The format of the new M73 code is the following:

There is obviously a new version of firmware released along with the MMU 2.0. It has new MMU-related features, such as “Load all filaments” option, which will enable you to load all five filaments quickly and easily thanks to the F.I.N.D.A sensor. 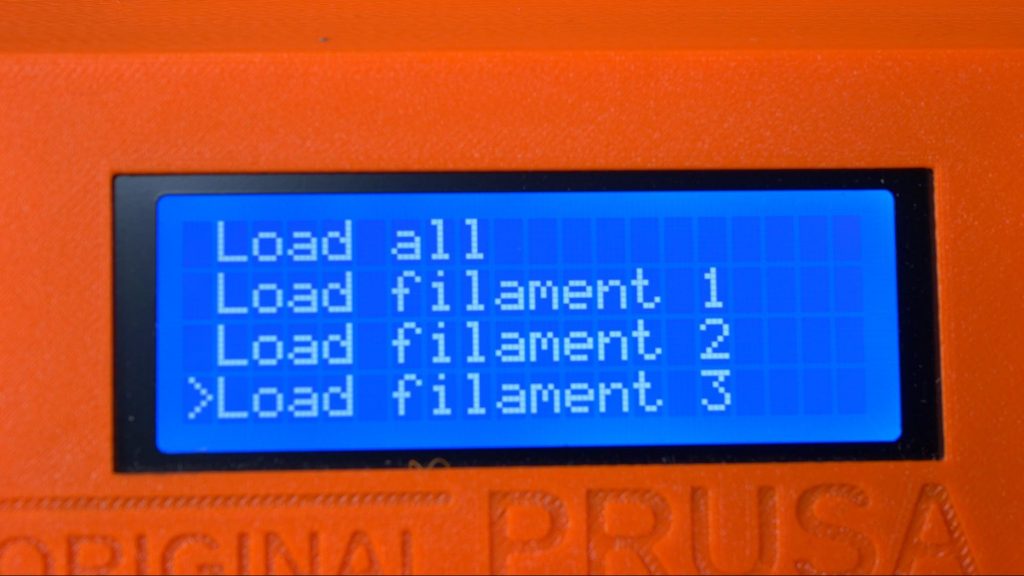 Another useful feature in a future firmware update will be a function for using up filament scraps. Imagine a situation when you have two spools of the same filament, one completely new, the other almost gone. MMU 2.0 will allow you start printing with the remaining piece of the old filament and once the filament sensor detects that the filament is completely gone, MMU 2.0 will automatically switch the selector to the next (new) filament and continue printing without a hitch.

But two materials are not the limit – you can use all five inputs to load five filament spools. So if there’s an object which doesn’t need a consistent color (a mechanical part, for example), you can use the MMU to automatically run through all the filament remnants you have and use them all up, leaving you with completely clean spools.

You can, of course, expect support for user-favorite materials such as PLA, PETG, ABS, Flex or even water-soluble filaments (BVOH and PVA). Right now we have profiles for PLA, PETG ABS and BVOH, and we are going to add more profiles soon. If you like printing soluble supports, you probably know how expensive these materials tend to be. That’s why we introduced a function that prints only the interface (the small part between the object’s surface and the top of the support) with soluble filaments, saving a lot of material.

We haven’t shown you many finished prints yet, so now is a good time to do something about that. Below, you can see a gallery of some of the things we have already printed. They turned out beautifully, and I think they represent the qualities of our multi-material solution pretty well. But something tells me this is just the beginning. I can’t wait to see what you will create with MMU 2.0 in the upcoming months!

And I think that’s everything for now. The first batch of orders already left our factory and perhaps by the time you start reading this article, the package will be already at your door 🙂 Our work doesn’t stop here, though. As you would expect from us, we will keep updating the MMU 2.0 based on your feedback. You can look forward to new firmware files, new Slic3r versions and much much more.

I hope that those of you, who will receive the MMU 2.0 in the upcoming days, will share your feedback with us and with the community. Show us your awesome prints, let us know what would make MMU 2.0 even better and, above all, have fun! 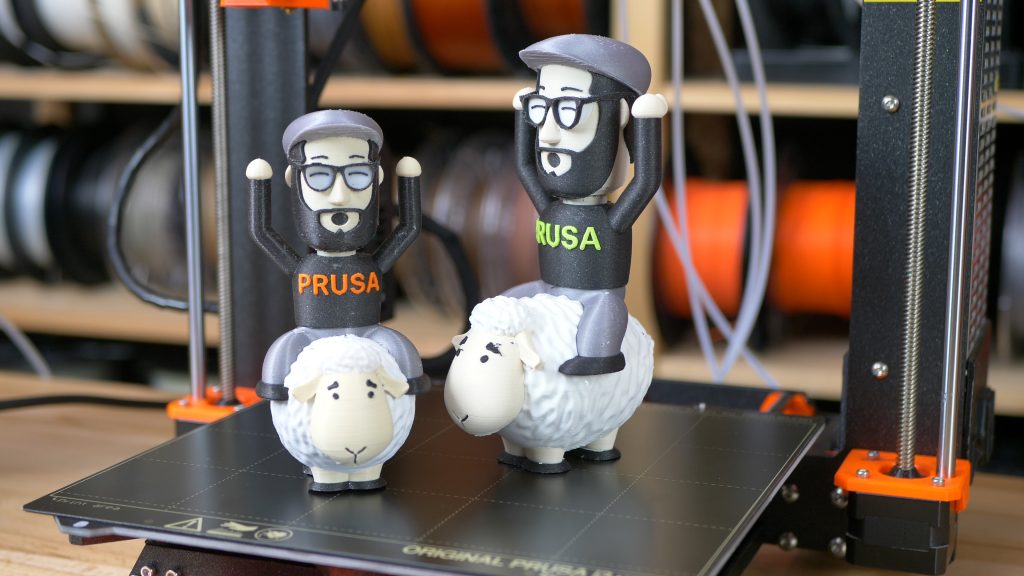