How to cut STL models for 3D printing in Meshmixer

There are at least three cases where cutting objects into smaller components could be your best option:

The first case is obvious. If it’s too big, there is no way of printing the model as one piece. Cases number 2 and 3 are a little bit trickier to recognize. Imagine you’re printing a perfect sphere. No matter which orientation you choose, only a tiny area will be in contact with the bed, and the print will inevitably fail. However, when you cut the sphere in half, you can easily place each hemisphere on the print bed and print it without problems. Such a simple cut can be made directly in Slic3r as explained in our Beginner’s guide for Slic3r Prusa Edition.

However, a simple cut along the Z-axis is not always enough. Sometimes, you’ll want to cut along the X or Y axis, or even with an arbitrary positioned plane. For that, the simple cutting in Slic3r is not enough. A good option is to use Meshmixer, cutting model in it is fast and easy.

We’ve been using Meshmixer in our previous tutorials, and we’ll continue to do so. It’s free, easy to use, and powerful software for editing and repairing 3D models. It’s available for both Windows and Mac (no Linux support though). Developed by Autodesk, it includes features like plane cuts, hollowing, adding custom supports and much more. In your typical workflow, it will fit as a step between creating/downloading model and slicing. You can download Meshmixer here. 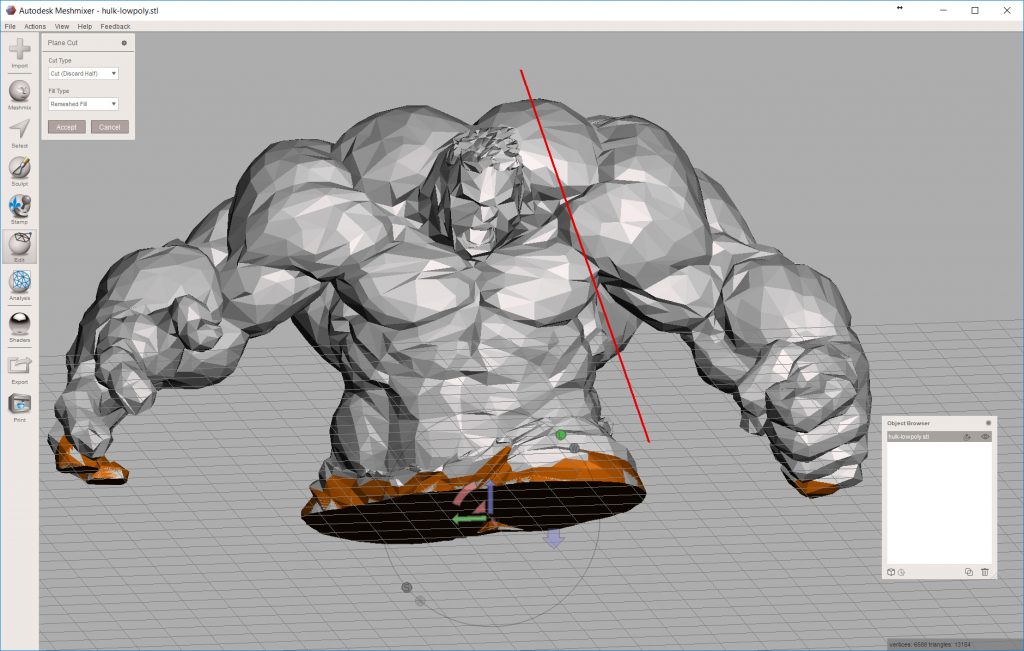 A plane cut of the Hulk

By default, Meshmixer cuts with an infinite plane. As a result, you might be accidentally cutting areas of your model that you wished to stay as one piece. This is most commonly a problem when cutting figures as illustrated in the image below. 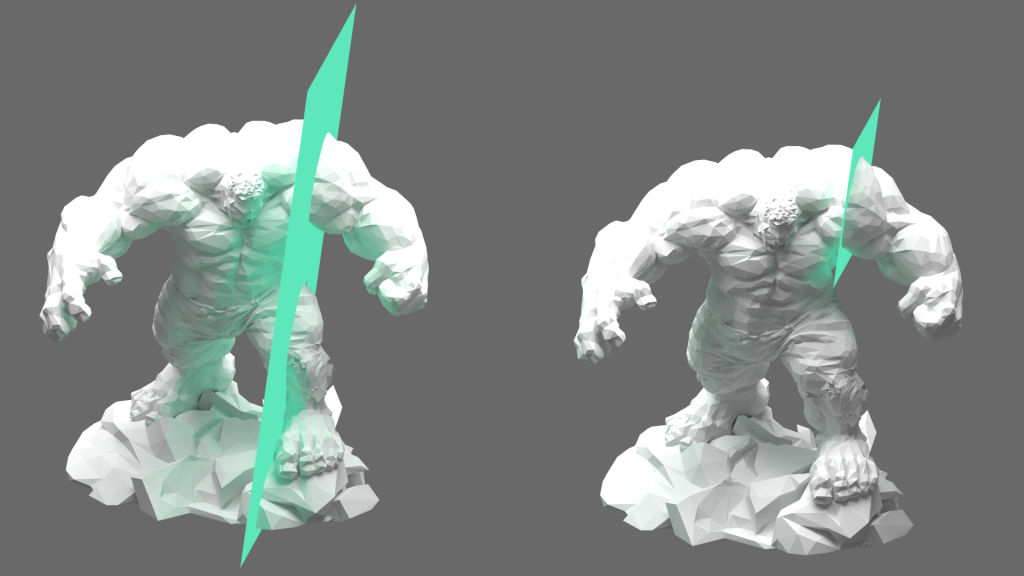 To prevent this behavior, we can specify a smaller area to be affected by the cut. Everything outside of this selection will ignore the plane cut and stay as one piece. 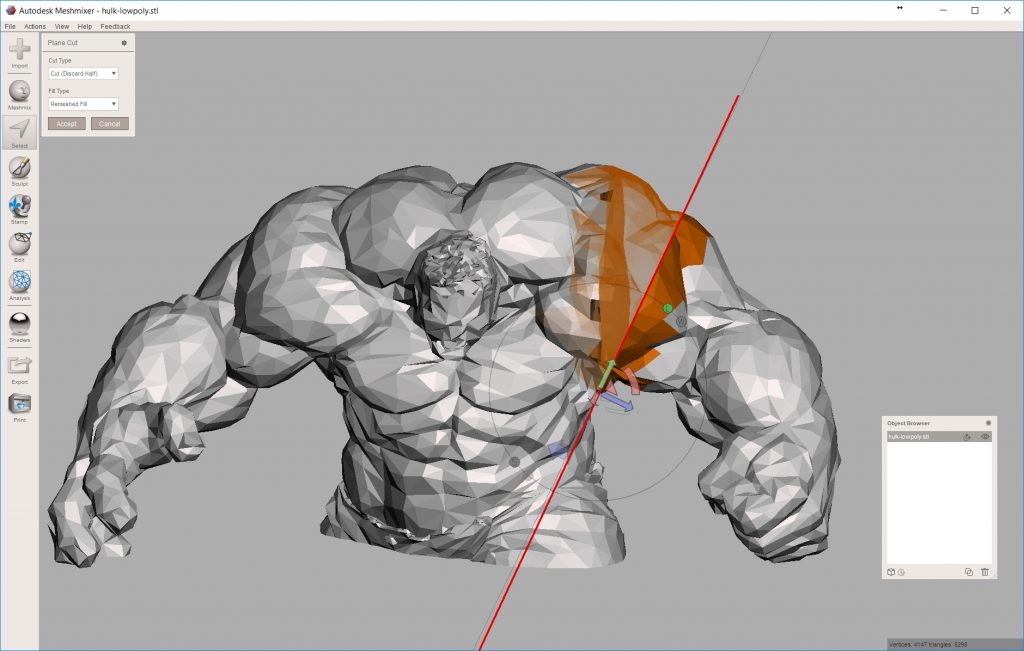 A cut through selection (right arm). Note that the cut does not affect Hulk’s body, even though the plane intersects it

When you finished printing individual parts, you’ll have to glue them together. This can get somewhat tricky and you’ll have to hold the pieces perfectly aligned as the glue cures. If the glue takes too long to cure, it’s difficult to keep the parts aligned the whole time and sometimes it’s impossible to use a clamp. And if it takes just a second (e.g., super-glue with an activator), you only have one shot and if you misalign the parts, it’s already too late to fix it. For this reason, it’s a very good idea to add some aligning pins. Doing this in Meshmixer is at the edge of its capabilities, but it’s doable. In a future tutorial, we’ll tackle the same problem with a more powerful, but also more complex software. 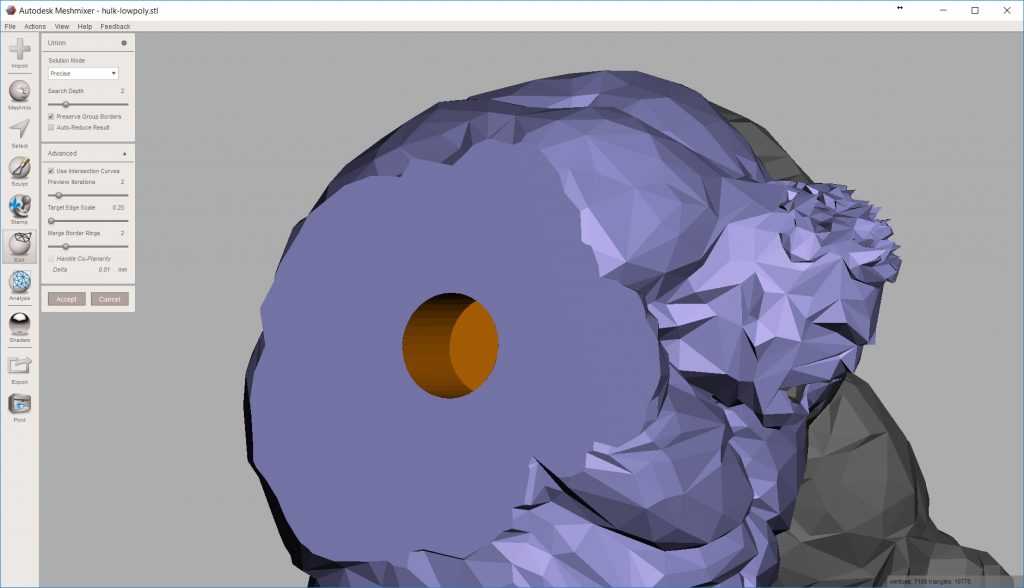 You can download Low Poly Hulk model by Tom Davis from MyMiniFactory.