In the last XL-related article, I mentioned that we want to bring you another update very soon. Since the publication of the previous update, we discussed the XL in our Prusa Live podcast, brought it to ERRF 2022 and we’ve shown off a couple of timelapses, but this article was, indeed, a long time coming. I’m sorry for the delay and I hope I can make it up to you in this blog post. I want to give you a better look at the XL’s electronics and reveal some new features of the Nextruder. And there are also many new time-lapses to show, because we’ve been printing a lot for the past couple of weeks.

A closer look at the Nextruder

From the previous announcements and dev diaries, you probably know that the most prominent feature of the Nextruder is the Loadcell sensor that ensures an absolutely perfect first layer every time you start a print. And we’re not exaggerating, just look at the picture and videos below. This new system goes far beyond the capabilities of the PINDA sensor. It was an absolute must for a large-size print area. We have also upgraded the toolchanger mechanism – we’re using better materials, plus, the mechanism is even more reliable and the final version requires no lubricant for smooth operation.

There are also some things about the Nextruder that we haven’t shared anywhere yet. So, first of all, the Nextruder is powered by a special Dwarf board with its own CPU and Trinamic driver. The XLBuddy mainboard only sends a simple request (e.g., heat the nozzle to 215 °C) and the rest is managed by the Dwarf board. We developed the same system for the segmented heatbed which is also controlled by a separate board that receives information from the XLBuddy board. This helps to reduce the sheer volume of information that would have to run back and forth between individual boards.

We also added a couple of quality-of-life features. One of them is the front status LED on the Dwarf board that lets you know the current status of the Nextruder, but that’s nothing extraordinary. This LED, however, is accompanied by two physical buttons that can be reprogrammed in the firmware. Right now, we’re using them to quickly purge or retract filament. Generally speaking, these two buttons can do whatever we want. They won’t be customizable via the LCD menu (at least not around the release time), but we’re curious to hear what you would like them to do. 😉

Cool addition no. 2 are two LEDs on the toolchanger that illuminate the nozzle. It was an often-requested feature and even though the Nextruder is less cluttered around the nozzle compared to, e.g., the MK3 and the nozzle is quite visible, it’s definitely a cool little upgrade. The Nextruder is also full of Hall sensors, which gave us nightmares for the past few months. There are up to 21 Hall sensors in the entire XL with all toolheads and due to the ongoing supply chain issues, we had to combine various types and brands which was a pretty difficult and time-consuming task.

Speaking of the nozzle: the heater block supports temperatures of up to 300 °C and we’ve also finished the development of a special adapter that lets you attach any kind of V6-compatible nozzle to the XL, so you’re not limited to our nozzles only. You can install any nozzle you want – from a hardened nozzle to high-flow models and nozzles with various diameters. The entire nozzle assembly is held in place only with two screws and swapping the nozzle is quick and simple.

With large-format 3D printing, you quickly realize that a 1kg spool is often not enough. The XL has built-in filament sensors, but if you don’t want to deal with filament swapping, you can, of course, always opt for some big spools – we’re offering 2kg spools of Prusament PLA Recycled and PETG Recycled which are perfect for these occasions. The spoolholders on the XL are ready for these bigger spools and can be easily extended if required. Is it just me or does this gif feel slightly… juvenile?

The XL is powered by a new XLBuddy mainboard, and the way it operates is much more advanced compared to our current models. Instead of having everything on one board, we’re introducing a “Sandwich” board. This is a rather simple “hub” with two PCIe-styled slots for expansion cards, and it also features connectors, such as USB ports, ethernet and a Wi-Fi module. And we designed this cool way of removing the boards from their ports.

The two slots are using the PCIe interface, but the wiring is, of course, different. So no ray-traced printing with your RTX graphics card 😉 These slots are populated with up to two cards – the first one is an XLBuddy board without any ports. This is the mainboard for the XL that sends commands to all auxiliary boards. The Splitter is required if you have 3-5 toolheads on your XL because it contains the required extra connectors.

The last bit of electronics is then located on the underside of the heatbed. It’s the heatbed controller with its own dedicated firmware that controls all heatbed tiles. This modular design gives us a great level of flexibility. We’ve covered that already in the previous articles.

Last but not least, the XL will be equipped with a built-in Wi-Fi module (on the XLBuddy board) with the possibility to connect an external antenna. We opted for a well-known ESP32-WROOM-32 so wireless networks will be supported from the get-go.

We’ve been running intensive internal testing for the past couple of months which has also revealed several areas that require our focus. Luckily, most of the issues we’ve found are software-related, so we don’t have to rework any major parts of the printer – the issues are largely related to the automatic homing function, which is more complex on a CoreXY machine, because the movement of the extruder in a single axis is controlled by two motors running simultaneously (as opposed to MK3S+ which uses one motor per axis). This, combined with long and thus somewhat flexible belts results in an issue we need to fix, otherwise features like Power panic wouldn’t work properly – the printer wouldn’t be able to return the nozzle exactly where it’s needed.

Moreover, due to supply chain issues and ever-growing prices, we’ve run into a serious issue with the linear rails we’ve been using for the past several years. To explain it a bit more: every part of the hardware and software is tuned for this specific brand/type. We’re currently looking at various options and it’s a complicated situation. Linear rails are one of the most important parts for this kind of 3D printer and the wrong choice can easily set us back significantly. We are now deciding between two brands of linear rails, plus we also need to choose the right types. E.g., a preloaded linear rail is better for the Z-axis due to the weight of the heatbed, however, it’s less than ideal for all other axes. 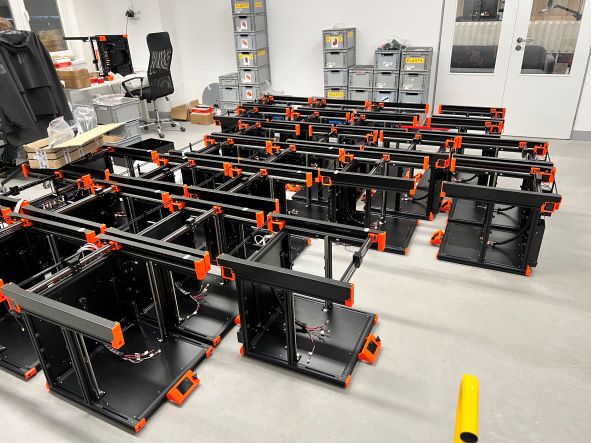 Due to these reasons, we need a couple of weeks to finalize everything. We’ve already made significant progress on most of these tasks and we will be able to send a larger batch (several dozen) XLs to our external betatesters in December. We will start fulfilling regular orders in January 2023. I’m sorry for the delay – those extra weeks are absolutely vital to finalize everything. We’ll be back with another update before the winter holidays and we’ll bring you more timelapses featuring the toolchanger and another batch of technical specifications!